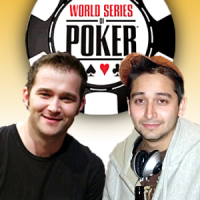 Eugene Katchalov has amassed an impressive list of poker accomplishments over his career – including taking down the Super High Roller event at January’s PokerStars Caribbean Adventure (earning $1.5m) and the WPT Five Diamond title in 2007 (earning $2.4m) – but a World Series of Poker bracelet has always eluded him. Until now. On Saturday night, Katchalov outlasted 356 other players – including Tom Dwan, Daniel Negreanu, Shaun Deeb and Jason Mercier — to take Event #5, the $1,500 Seven Card Stud tournament.

Destiny was clearly on Katchalov’s side Saturday night, because he managed to prevail despite opponent Alessio Isaia holding a 5.4x chip advantage at the start of heads-up play. Isaia has been riding his own hot streak of late, having earned $800k in the past six months, but Katchalov would not be denied. Katchalov, whose previous WSOP best was a third-place finish at the 2010 $10K H.O.R.S.E. Championship, called the win ‘amazing,’ admitting it felt good “to finally get the monkey off my back.” Katchalov earned $122k to go with his shiny new bracelet, while Isaia had to console himself with the $75.9k second prize.

On Sunday, Allen Bari also earned his first-ever WSOP bracelet (and a personal best $874k) for triumphing in Event #4, the $5k NLHE tournament. The 865-strong field took a day longer to wade through than originally planned, and the final day was notable for the presence of Maria Ho, the first female player to make a final table at this year’s WSOP. Had Ho won, she would have been only the 14th female to take a WSOP open event bracelet, but the chips were (literally) stacked against her from the get-go.

When the final four began play on Sunday, Ho held the shortest stack. Though she managed to persevere to enter heads-up play against Bari, Bari held an almost six-to-one chip advantage, and the outcome was never really in doubt. Still, Ho takes home $540k for placing second, more than double her previous largest cash, so that should help soften the blow. And the WSOP is far from over…