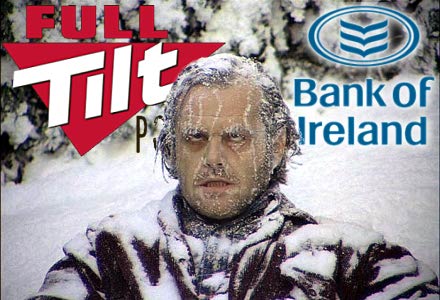 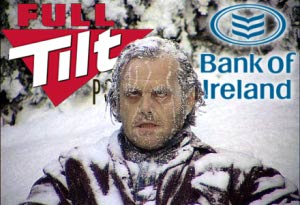 ✖ eGamingReview is doubling down on its initial report that Full Tilt Poker has managed to unfreeze one of its Irish bank accounts, despite subsequent denials from the US Department of Justice. The FTP source has now told eGR that the unfrozen account was not one that was seized by the DoJ via the Black Friday indictments, but a separate corporate account that was frozen by skittish Bank of Ireland execs in full-on overcompensating cover-your-ass mode. eGR’s source claims Full Tilt was forced to contact the DoJ in an effort to persuade them to persuade the Bank of Ireland to unfreeze the account. A DoJ spokesperson declined to confirm or deny the story.

✖ The Merge Gaming Network has decided to temporarily put the brakes on accepting any new US players. Various sources are reporting the moratorium will last anywhere from one to three months. Merge has been the biggest beneficiary of the post-Black Friday exit of the major poker sites from the US market, but is clearly experiencing some major growing pains. Holdempokerchat.com claims the recent implosion of payment processor QuickTender/Use My Wallet has left Merge reliant on credit cards, with some Merge skins reporting a mere 20% success rate in processing transactions. As every remaining US-facing company is undergoing similar eCom restrictions, this scenario could have been predicted (and was predicted, by a certain someone we know).

✖ Cake Poker Network skin PowerPoker has become the latest poker room to stop taking new US players. A notice on their website stated only that “recent movements by the US government concerning online poker” were behind their decision. Existing US player accounts “will remain accessible as normal.”

✖ Maryland’s Anne Arundel County Police Department says the $470k it received from the US Immigration and Customs Enforcement (ICE) for their assistance in the Blue Monday indictments represents the “single largest asset distribution in county history,’ according to County Executive John R. Leopold. The county averages about $250k per year in forfeited assets, so clearly they outdid themselves by their role in the unimaginatively named ‘Operation Texas Hold’em’. The Maryland State Police have apparently been informed that their own check is in the mail. Homeland Security Investigations special agent William Winter claimed that “forefeiture is a powerful tool … We seek to deprive criminal organizations of their main motivator – money.” In what we’re sure was an unintentionally ironic punchline, Anne Arundel County Police Chief James Teare Sr. revealed at least part of his department’s motivation in cooperating with ICE by stating that the $470k check was “huge, especially in these economic times.”

✖ Poker Royalty, the poker talent agency that represents such luminaries as Daniel Negreanu, Phil Hellmuth and Tom Dwan, has responded to allegations made by Nick Rainey that former Poker Royalty employee Chris Porter had been selling 100% rakeback accounts on Full Tilt to various acquaintances. While at Poker Royalty, Porter represented (among others) Patrik Antonius, but is now a team pro manager at Full Tilt. Poker Royalty released a statement stating that they had “no knowledge of this ex-employee’s alleged actions,” that the company “has never benefited in any way from a rakeback account outside the scope of a client sponsorship agreement” and that any further inquiries should be directed Porter’s way.

✖ The Poker Players Alliance has appointed Rich Muny as VP of Player Relations on the PPA Board of Directors. Muny, who has served on the PPA Board since 2007, claims his new mandate will be threefold: to focus on communication between the PPA and players; to convey the enormity of the challenges the PPA faces on Capitol Hill; and to take the fight to PPA opponents. And, if he has time, leap a few tall buildings in a single bound.