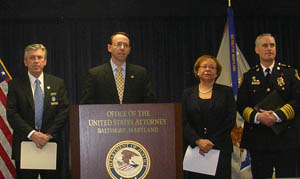 It was an ugly Monday as more indictments were handed out to gambling websites. But it wasn’t the Department of Justice handing out indictments this time as was the case with Black Friday. This time, it was the U.S. Attorney of Maryland that went ahead and seized eleven bank accounts and ten domains including Doyles Room.

Anyone who tries to access those web sites will be directed instead to a banner that provides notice that the domain name has been seized by order of the court. The banners are expected to be posted later today.

The indictments were announced by United States Attorney for the District of Maryland Rod J. Rosenstein to the press via a release. Rosenstein said in the release, regarding the indictments:

“It is illegal for internet gambling enterprises to do business in Maryland, regardless of where the website operator is located,” said U.S. Attorney Rod J. Rosenstein. “We cannot allow foreign website operators to flout the law simply because their headquarters are based outside the country.”

“The proceeds from illegal Internet gambling are often used to fuel organized crime and support criminal activity. ICE HSI will work diligently to uncover illicit transactions involving these types of financial crimes. Together, with our law enforcement partners, we will disrupt and dismantle organizations that commit these crimes, regardless of their location, whether here in the United States or abroad.”

According to the two count indictments and the affidavit filed in support of the seizure warrants, ThrillX, a registered company in British Columbia, Canada, with offices in Vancouver, Canada and San Jose, Costa Rica, is a software solutions provider producing online sports book and casino software. BMX Entertainment, based in Limassol, Cyprus, operates six websites that offer online sports betting services.The indictments allege that the defendants own and manage illegal gambling businesses involving online sports betting.

A sworn affidavit alleges that on November 12, 2009, a Maryland-based online gambler and cooperating informant confirmed that he/she frequented gambling sites, opened accounts and gambled in Maryland. The gambler agreed to set up online gambling accounts and was provided $500 to place bets on gambling websites. The gambler created an account on a BetEd website and placed several bets. On March 30, 2010, BetEd used Linwood to wire transfer $100 in winnings to the gambler’s bank account.

You can read the sworn affidavit in its entirety by clicking here.

The indictments and affidavit seek the forfeiture of the bank accounts used to process the gambling transactions, as well as domain names of the websites used by the defendants to further the online gambling transactions. The defendants face a maximum sentence of five years in prison for operating an illegal gambling business and a maximum of 20 years in prison for money laundering.