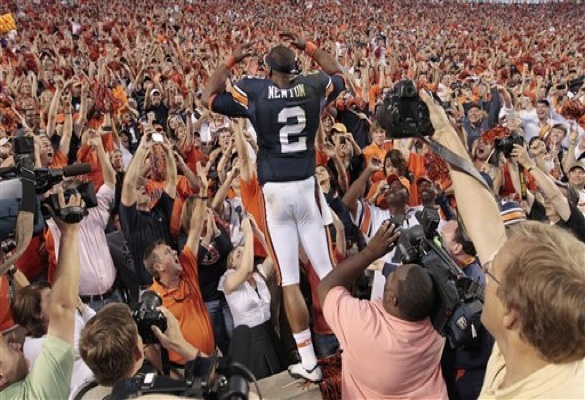 The Department of Justice certainly must have had a checklist for this year. Judging from Black Friday, high on the list was to fuck up online poker. Now it seems the next item on the list was to go after College Football and the Bowl Championship Series.

The DoJ sent a letter to NCAA president Mark Emmert this week questioning the need for the BCS and seeking clarification as to why college football doesn’t have a playoff. This week, rumours continue to swirl that the DoJ is considering an anti-trust case against the BCS which may already be facing a similar suit from the state of Utah.

The letter to NCAA president Mark Emmert read in full is as follows:

Serious questions continue to arise suggesting that the current Bowl Championship Series (BCS) system may not be conducted consistent with the competition principles expressed in the federal antitrust laws. The Attorney General of Utah has announced an intention to file an antitrust lawsuit against the BCS. In addition, we recently received a request to open an investigation of the BCS from a group of twenty-one professors, a copy of which is attached. Other prominent individuals also have publicly encouraged the Antitrust Division to take action against the BCS, arguing that it violates the antitrust laws.

On March 2,2011, the New York Times reported that the National Collegiate Athletic Association (NCAA) was “willing to help create a playoff format to decide a national championship for the top level of college football.” In that context, it would be helpful for us to understand your views and/or plans on the following:

1. Why does the Football Bowl Subdivision not have a playoff, when so many other NCAA sports have NCAA-run playoffs or championships?

3. Have you determined that there are aspects of the BCS system that do not serve the interests of fans, colleges, universities, and players? To what extent could an alternative system better serve those interests?

Your views would be relevant in helping us to determine the best course of action with regard to the BCS. Therefore, we thank you in advance for your prompt attention to this matter.

To be frank, these are actually serious questions that football fans have been asking for years. That said, BCS executive director Bill Hancock’s sentiments quoted in the Wall Street Journal echoed the obvious thoughts of everyone that hears about this story, Hancock remarked,

“Goodness gracious, with all that’s going on in the world right now and with national and state budgets being what they are, it seems like a waste of taxpayers’ money to have the government looking into how college football games are played.”

But there are some shady things going on with the BCS and college football and if a little pressure from the DoJ helps to get rid of the system, then college football will likely be better off for it.

But the question for us is how will this affect college football betting? Bowl games are popular, but perhaps a playoff system will mean more games which could equate to more bets and more revenue instead of the current system which seldom produces an undisputed national champion.