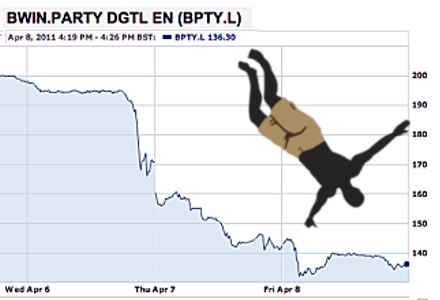 Meanwhile, it was another bloody day for bwin.party (Pwin) on the killing floor of the London Stock Exchange. Pwin shares have now lost close to a third of their value over the past three days, and analysts at UBS believe the worst is yet to come. UBS’ Simon Whittington issued a ‘sell’ note on Pwindenburg stock, reducing its price target from 185p to a mere 100p. “We believe there could be further weakness in the shares. Whilst we do not expect the punishing regulation to cause all German profits to be lost, the uncertainty means this scenario should now be at least considered. Even if profits are not lost, the risk attached to this is likely to step up significantly, and we see the current risk/reward as highly unattractive … Save for EU intervention, we see little reason for the German Lander to make meaningful concessions.”

The vulnerability of public gaming companies to the whims of governments extends even to gaming-related firms. Pwin’s pwoblems thoroughly spoiled the market debut of digital sports media outfit Perform, which had already been forced to price its shares at the absolute low end of its stated range. Shares then proceeded to lose 15% of their value on their very first day on offer. Nice. Wonder how Skrill (the online payment outfit formerly known as Moneybookers) will fare next week, when its own IPO is scheduled to go off in London. We emphasize scheduled, because while companies who get the urge to go public may be considered foolish, they aren’t always crazy.

Bet365 hangs up on its telephone bettors for the last time
Peter Amsel
5 June 2020
.