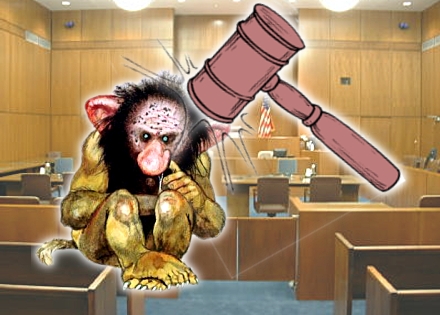 Hopes that the world isn’t entirely crazy were given a boost over the past couple weeks as parasitic patent trolls attempting to extort money from genuine businessmen suffered two significant court defeats.

In the first case, New Jersey-based Lottotron, Inc. went up against Interactive Systems, Inc. N.V. (ISI), the licensed operator of Sportsbetting.com. Lottotron claimed that ISI had infringed on its US Patent Number 5,921,865. This ‘865’ patent claims a method that allows individuals to place a remote wager with a lottery operator. Lottotron has since asserted that this method applies to all online wagering, and has filed dozens of patent infringement lawsuits against companies including PartyGaming, Playtech, PokerStars and GTech. 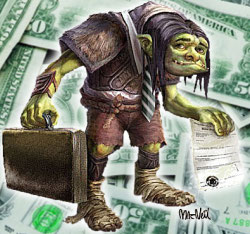 While the mechanics of online gaming had already been well established by the time Lottotron filed its patent claim in 1998, the fact is that the US Patent Office is much like any other US gov’t agency these days – underfunded, understaffed, and facing a mountainous backlog of paperwork that results in patent applications receiving far less scrutiny than is warranted.

Lottotron itself doesn’t appear to have done anything with its supposed invention except sit on it and wait for someone else to take the risk of building an actual business with employees, equipment and supplies – after which Lottotron unleashes its lawyers. In many cases, the underfunded companies have chosen to settle out of court with Lottotron rather than face the unknown costs of a protracted legal battle. These quick settlements are precisely what Lottotron seeks, because hefty legal bills eat into their profit margin. Put plainly, as a business model, extortion is far more lucrative than litigation.

But ISI chose to litigate, and almost immediately won a ruling from US District Court Judge Faith S. Hochberg that ISI’s casino games did not literally infringe on Lottotron’s patent. This forced Lottotron to prove that ISI’s casino games were insubstantially different from the type of games offered by state lotteries. When Lottotron failed to do so, the jury unanimously returned a verdict in ISI’s favor on March 16.

ISI’s attorney Bill Gantz told CalvinAyre.com that the decision to fight for the initial ruling that ISI’s games did not literally infringe on the 865 patent provided “a clear path to victory. We waived many of the typical patent infringement defenses, all of which require experts and cost a lot of money to support.” Gantz believes this specific ruling “benefits the entire industry. Lottotron is foreclosed essentially by claim preclusion doctrines from successfully asserting literal infringement against online casino style games.” As for the verdict itself, Gantz says it demonstrates that “defense, rather than capitulation, is feasible and can be done.” Gantz is currently advising two of the remaining 40 defendants targeted by Lottotron.

COPYRIGHT TROLLS RIGHTHAVEN SET RIGHT BY DISTRICT COURT JUDGE
Just two days after Lottotron suffered its defeat, notorious Las Vegas-based trolls Righthaven LLC lost a copyright infringement case against a nonprofit organization. Righthaven is a co-venture involving attorney Steve Gibson (pictured below, with friend) and Stephens Media, publishers of the Las Vegas Review-Journal and other media outlets. Their business model works thusly: Stephens Media assigns copyright control of its stories to Righthaven, which then sues blogs and other websites that have re-posted these stories in whole or in part. Usually, media outlets prefer to first contact the offending site with a request to take down the infringed material, only proceeding to litigation if the request is not met, but Righthaven skips this step and heads straight for the judicial jugular. 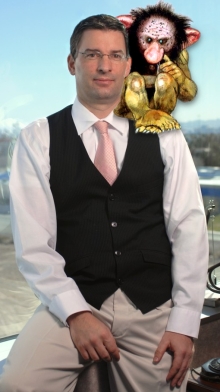 Righthaven has filed over 250 such federal lawsuits – including one against online gambling forum MajorWager — seeking up to $150k in damages per infringement plus the surrender of the offending website’s domain name. Faced with the potentially catastrophic loss of their domains, more than 70 defendants have reportedly chosen to settle by forking over several thousand dollars each, and Gibson and Stephens Media split their ill-gotten gains 50/50.

But Righthaven’s gravy train went off the rails when US District Court Judge James Mahan rejected Righthaven’s infringement claim against the Oregon-based Center for Intercultural Organizing (CIO). Mahan ruled that CIO’s use of a Review-Journal story fell under the category of fair use, and rejected claims of damage to R-J by noting that the “market [served by CIO] is not the R-J’s market.” Mahan also said Righthaven’s use of the copyright solely as a basis for a lawsuit stripped said copyright of much of its legal protection. Convinced that “the copyright has been removed from its original context,” Mahan said Righthaven’s tactics had a chilling effect on free speech, which was never the intent of the federal Copyright Act. True to form, Righthaven rejected the judge’s reasoning, and plans to appeal the decision.

The tactics employed by trolls like Righthaven and Lottotron are prime reasons why the legal profession enjoys such a dubious reputation. These companies are cut from the same moldy cloth as infamous patent troll Scott Lewis of 1st Technology. 1st Technology is a lofty sounding name, but as Lewis himself explained, his company’s sole reason for being is “to reach swift and fair settlements that respect our intellectual property rights for companies with U.S. facing operations.” Take it from us, pond scum like Lewis don’t deserve respect.