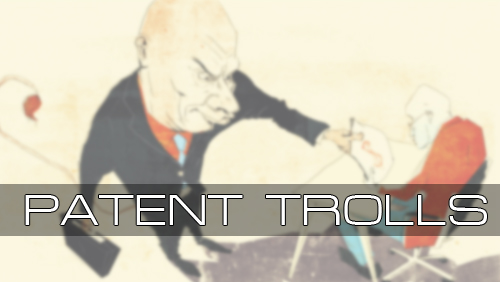 Patents were created to protect innovation, but these days they are frequently used to stifle it thanks to what is essentially a broken American patent system. Veteran federal Judge Richard A. Posner has argued is probably not necessary in most industries particularly in fast-moving markets dominated by software, since companies looking for an advantage will use litigation as a strategy to harm their profitable competitors. He should know – he’s the judge who dismissed a lawsuit by Apple against Motorola. On the other side of the coin are the patent trolls, holding companies that buy up old patents and either sue tech giants or extort licensing fees from small businesses by simply threatening to file suit over patent violations.

When it comes to patent trolls, few are as reviled as Personal Audio, LLC. The holding company, founded in 2009, owns a slew of patents that is has wielded as weapons in court against a variety of opponents, claiming ownership of electronic distribution concepts so basic that they should never have been patented in the first place. It won an $8 million verdict against Apple on the premise that its patent covered the concept of playlists and has settled similar claims with other large firms like Samsung, Motorola, and Amazon. Personal Audio’s current targets are much smaller: podcasters.

Personal Audio claims that podcasting is covered by a patent it owns for “episodic content delivery” that was first filed in the mid-1990s, and it’s trying to use that claim as leverage against seemingly everyone who has enjoyed any level of success by distributing creative episodic work online. Adam Carolla, the radio personality and former “Man Show” host, produces The Adam Carolla Show in his own studio and distributes it as a podcast, free of charge, via his ACE Broadcasting company. Personal Audio wants Carolla to pay a licensing fee (usually undisclosed but described as “exorbitant,” though HowardStern.com reported it as $3 million) for the right to continue distributing his show online. It has also sent similar demands to other podcasters, from popular comedians like Marc Maron and Chris Hardwick to small networks like Togi Entertainment that distribute internet talk radio programming from dozens of affiliated hosts.

The strategy was to force Carolla and the others to cough up the licensing fee as an alternative to fighting a far more expensive legal battle; patent litigation is particularly burdensome because the burden of proving non-infringement is on the defendant, leading to lengthy cases. Instead Carolla started the Save Our Podcasts Legal Defense Fund, which is soliciting funds to help defend Carolla’s venture against Personal Audio’s frivolous claims on behalf of all podcasters, whose very survival Carolla says would be threatened if the patent troll were to win in court.

“Normally people settle up with these guys because it’s so expensive to fight (them) in court. But…we’re going to circle the wagons, band together, and come out throwing punches,” Carolla said last week in the promotional video for his FundAnything.com campaign. He got a boost of support from friends like Howard Stern, Howie Mandel, KROQ’s Kevin and Bean Show, and fellow podcaster Marc Maron. To date the campaign has raised just over $100,000 online from more than 2,000 donors. Later in the monthCarolla will host a benefit show in southern California to raise more money for the fund. Headlined by none other than his former Man Show co-host (and current late-night talk show favorite), Jimmy Kimmel. The outcome of the case is far from being determined, but thanks to Carolla’s effort to fight back, whatever happens, it won’t be business as usual this time around.

Though not as life-or-death as it is for the little guys, the business of patent trolling in America is at an interesting point for the giants, too. Google was handed a defeat in U.S. District Court earlier this year over patent violations in its AdWords program, the cornerstone of its online advertising business, that could be worth hundreds of millions of dollars per year. The case was brought by Vringo, a holding company that purchased two patents from the defunct early Web search engine Lycos in 2011. ArsTechnica’s article on the case mentions that Vringo’s “financial statements describe its business as now being focused on patent assertion.” Just yesterday the company reported its 2013 results: revenue of $1.1 million and a net loss of $52.4 million, with enough extra cash to cover its operations through 2015 even if it doesn’t experience any “significant revenue event.” Nearly 40 percent of the loss was from legal fees alone, testament to two facts: without the broken patent system’s perverse incentives Vringo would have no reason to exist, and the likelihood of winning is real enough that Vringo won’t be searching for any more traditional revenue streams in the near future.