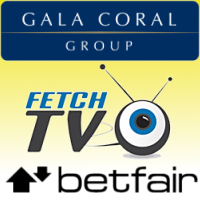 According to a report in the Daily Mail, Gala Coral CEO Carl Leaver may soon be on the way out. The former Marks & Sparks director only just took over from former Gala CEO Neil Goulden in November, but rumors of sharp disagreements with Gala’s board over the future direction of the company are fueling speculation that Leaver’s tenure will be a short one. Leaver’s background is in retail, and with speculation rampant that Gala wants to rid itself of much of its land-based operations and shift its focus online, Leaver may no longer be seen as the right man for the new reality.

Following its recent Australian interactive TV deal, Betfair is now being credited with launching the first interactive application on IP Vision’s FetchTV. The football betting app allows Betfair customers to make wagers on UK and European matches via their FetchTV remote control. The app can also be overlaid onto the channel on which the match is taking place, sort of a HUD for sports betting. Betfair’s Simon Miller said (we’re paraphrasing here) the app was a boon for lazy sods that can’t be arsed to walk all the way over to their computer to place a bet or who lack the manual dexterity to juggle a TV remote along with their mobile device. Miller also claims that other sports apps are in the pipeline and will launch on FetchTV “in due course.”

In other Betfair news, the company revealed that it’s spending about $8.1m annually on its exchange wagering operations in America. Based on the “size of the opportunity,” the company will continue to spend that sum for the next few years as it waits for states like New Jersey and California to get their respective programs in gear. While California has a hard target of May 2012 to launch its exchange wagering regime, Betfair CEO David Yu says New Jersey’s situation is “less clear,” despite Gov. Christie’s approval of the exchange wagering bill in February. In the meantime, Betfair’s purchase of Television Games Network (TVG) appears to be paying off, as the advance deposit wagering company and racing channel posted a 6% rise in handle and revenues in Q3 (Nov. 2010 – Jan. 2011) over the previous year’s tally.