Home / Business / Betfair share price drops and has knuckles rapped along with 888.com 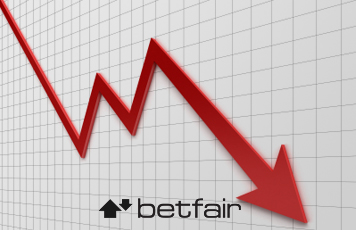 The world’s leading betting exchange, Betfair, has seen shares plummet to below 900p ahead of the publication of results in just over a week’s time.

Liberium Capital had already rated the fledgling firm as a “sell” with a target price of 850p before the price dipped below the 900p for the first time since their IPO in October of last year.

At the time of writing, the price wass at 886p and could slip even further as results are expected to have been adversely affected by event cancellations and poor weather before Christmas.

Betfair, along with 888.com, also saw the long arm of the law following a spate of misleading advertising from the two firms.

Industry watchdog the Advertising Standards Agency (ASA) pulled Betfair up after 10 complaints were filed against a “Happy Hour” email campaign in relation to having 50% reload bonuses removed from their accounts without notice.

It was fine until it was discovered that you had wager a certain amount of money before any of the winnings could be reaped and spent on 8,888,888-penny sweets. Although this only received one complaint, it still goes to show that gambling adverts that are anything but black and white usually come to the attention of the ASA.

Lads head turned by new beau. Will they be jilted once again?
Jamie Hinks
7 January 2013