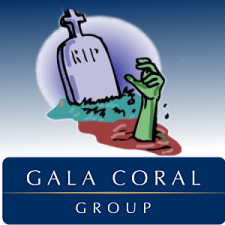 Contrary to reports earlier in the week, Gala Coral has not dropped out of the hunt to acquire the UK Tote. Sources close to Gala told the Daily Mail that they believe the false info originated from within the Tote itself – from employees fearful for their jobs if the cash-strapped Gala won control and started reducing costs. However, Tote sources told the Mail that this theory was nonsense, because “Tote management are not sophisticated enough to play those kind of games.” These same sources point the finger of blame at one of the failed bidders for the pari-mutuel giant, apparently for no other reason than resentment at having fallen short. As the Mail’s source put it: “There is a lot of behind the scenes jostling going on.” Who knew auctions could be so violent?

Frankly, it’s getting violent on UK racecourses. Spectators at the Newbury racecourse in Berkshire on Friday were horrified when two horses died from an apparent bolt of electric current. Witnesses claim the two animals, Fenix Two and Marching Song, suddenly reared up on the track, then “dropped like stones.” Despite the tragedy, the race went ahead as planned, although some horses were later found to have burn marks on their mouths. Electric cables buried under the ground are suspected to have been punctured from recent drilling aimed at aerating the course. Feeding this theory are suggestions that the two dead horses were wearing steel shoes, rather than the alloy versions worn by the other animals.

That brings us to the steel balls being dangled by the French government, which has rejected the European Commission’s (EC) finding that the protection afforded to former horse racing monopoly Pari-Mutuel Urbain (PMU) distorts the French market’s competitive conditions. The EC feels that PMU’s continued monopoly in the land-based space gives PMU an unfair advantage over their online-only competitors, while French authorities believe that EU law affords member states “wide discretion as to the nature of services that could be described as ‘general economic interest.’” In other words, FU, EU.