Home / Business / Pwin to get rid of “surplus asset” Ongame 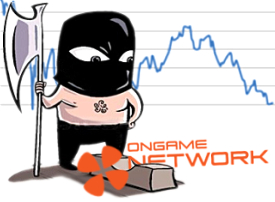 It may not have fully happened yet but the merger between bwin and PartyGaming to create the worlds largest publicly traded gambling company will soon be completed. Even though they decided against adopting the Pwin moniker suggested by many around here, bwin.partygaming is still looking to take on what the industry has to offer.

As we originally reveled in out analysis of certain Pwin merger documents, bwin’s Ongame network was likely to be one of the parts they sent to the great Pwin flea market that will be taking place at some point soon. Pwin have now confirmed this to be the case.

eGaming Review’s article quotes a spokesperson from bwin saying, “There will be surplus assets once platforms are unified, and this may be poker. Bwin and Party have strong platforms, and in order to avoid duplication, not all platforms will be needed.

“Ongame may be repackaged, offered to a potential buyer. Partnerships are also thinkable, where they would take an interest. But no deadlines for this have been decided.”

bwin originally acquired the US-facing poker network back in March 2006 around the time the UIGEA was coming in to force, and as we reported last month they may see offloading it as an advantage ahead of any move into the US market. They didn’t take as many pre-UIEGA bets as Party, so haven’t signed a non-prosecution agreement, but the Ongame baggage may give them more reason to worry.

The bwin spokesperson continued: “We believe that the trend to regulation in the US is still there. Even though Democrats do not dominate Congress any more, this does not make it different from our perspective.

“We understand that that the American gaming industry wants online poker regulated, as they want access to that revenue stream. Regulatory developments in the US would raise interest in these assets. But we haven’t yet established any firm deadline, and will look at all options.”

Although there’s no rush to get rid of Ongame, it’s likely that this deal will be struck sooner rather than later – whether it is for cost saving reasons or wanting to make a swifter transition into a regulated US market.