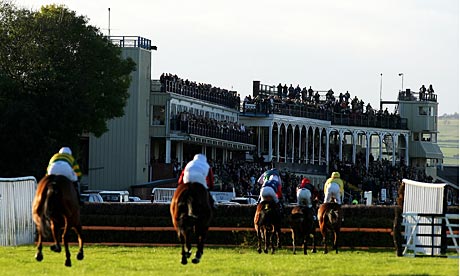 When MP for Newmarket, Matthew Hancock, rode into the House of Commons on horseback complete with jockey’s attire and whip they must have thought that Max Mosley had organised them all a governmental fetish party. Apart from the part about the horse, jockey’s attire, a horse, Max Mosley, and a fetish party the above was all true as Hancock had managed to secure a parliamentary debate on the issue of the horse racing levy.

The proceedings, which lasted two hours and 15 minutes, contained all the usual murmurings from the handful of MPs present, plenty of politeness and a well thought out discussion by the Right Honourable Mr Hancock.

Hancock’s motion which was to “bring forward proposals to improve the system of funding for racing and the relationship between racing and bookmakers before the end of 2011”, was carried by those present, which included MPs from both sides of the political fence.

The plans put forward by Hancock include a commercial funding system for the racing industry, which will be supported by the formation of a “racing right”. This will be sold to the bookmakers and only then will they be permitted to take bets from the sport.

Although, when we contacted those in the gambling industry with a vested interest in the debate we found them to all be singing from the same hymn sheet.

Ladbrokes are one company that have been at the forefront of the British gambling industry since anyone can care to remember. Their spokesperson, Ciaran O’Brien, said of yesterday’s debate: “It’s a backbench debate that was attended primarily by MPs with racecourses in their constituency, and isn’t binding in any way. We are actively pursuing a commercial replacement of the Levy rather than any state-backed betting right.

“Racing has been very successful in increasing its revenues from bookmakers through media rights and we see no reason why we cannot abolish the anachronism that is the Levy and base funding around media rights (on and offline), sponsorship and other commercial partnerships.”

William Hill, meanwhile, was equally as scathing of the levy, spokesperson Andrew Lyman saying: “William Hill support the end of the Levy to be replaced by a proper commercial arrangement reflecting a willing seller and a willing buyer.

“A betting right has been promoted by sport for sometime without success. In English law there is no “right” in the sporting spectacle itself and creating some sort of quasi property right through primary legislation would be fraught with difficulties for Government. It would also create competition law issues and lead to the abuse of a dominant market position for any sport holding such a right.

“It has been tried in France and is failing due to sports governing bodies trying to exact too higher a price from sports betting operators.

“In asking for a Levy of between £120-150 million, racing have already shown that they could not be trusted with such a “right” and would exploit a dominant market position.

“If Government were to do this they would simply be replacing a State enabled subsidy with another statutory scheme that distorts the market.

“Racing has enjoyed a massive rise in betting shop picture income and the racecourses have new lucrative contracts with SIS and Turf TV taking them through to at least 2017. This income more than adequately compensates for a declining Levy.”

If the comments of these two companies are anything to go by it seems like it will be a long time yet before any deal is made in regard to the future of the levy.