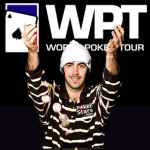 Day 3 is in the books at the WPT Foxwoods, with 28 players coming back on Sunday (beginning at noon EST). Of those returning, an unlucky three will be cut before the money kicks in. Chris Hunichen is current chip leader with 714k, followed by Nikolai Yakovenko at 580k and Josh Arieh at 548k.

This year’s starting field of 242 was off 31% from the 353 who registered in 2009. Accordingly, the eventual winner will collect $548k, a hefty drop from the $910k Cornel Cimpan took home last year at this event. But some players have motivations beyond mere money.

Currently sitting in 8th position is Jason Mercier with 342k chips. Mercier has something in common with Daniel Negreanu, current chip leader at the EPT Vienna final table. If Negreanu wins, he’ll become just the third player to earn poker’s triple crown. Mercier, with multiple EPT titles and a WSOP bracelet to his credit, may join Negreanu in that elite club soon after.