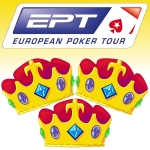 Daniel Negreanu is sitting pretty at the end of Day 4 action at the EPT Vienna, with a sizeable chip lead over yesterday’s top dog, Konstantinos Nanos. Heading into Sunday’s final table, there’s a lot more on the line for Negreanu than just the €700k first prize. Should Kid Poker maintain his lead until the (not so) bitter end, he’ll not only vault back atop the all-time money list, he’ll also become just the third player in history (joining Gavin Griffin and Roland de Wolfe) to earn triple crown status – WSOP, WPT and EPT honors. Negreanu already has four WSOP bracelets and two WPT titles, making Vienna his best shot at hitting for the alphabet cycle.