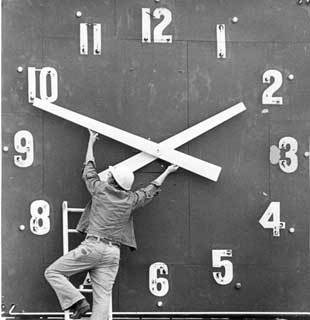 In most parts of the world, within the next 24 hours, everyone will engage in the annoying ritual of setting their clocks back an hour, only to set them forward an hour again in the spring.

William Hill is now offering odds of 5/2 that the practice will be officially outlawed by October 31, 2015 – and 2/7 that we will still be gaining or losing an hour twice a year. Graham Sharpe, spokesman for William Hill said, “Many regard the twice yearly ritual of putting clocks backward or forward as a relic of years gone by, but the betting suggests that we may well be doing it for at least another five years”.

The only benefit I have ever seen from this whole ritual is on those weekend nights when you’re out gamblin, drinkin and carryin on, you have some fine, curvy blonde bombshell in one arm and an almost empty glass in the other and you look at your watch in disappointment, why? Because it’s last call! (Yeah, there is such a thing in North America). It’s only during those instances when you get that invaluable extra hour do I appreciate the whole practice.

Conversely, ten times out of nine, the same practice screws you over in the Spring, whether it’s an hour less to sleep in, or when you forget to make the change and show up and hour late for work, losing an hour is never a good thing. I hope they do outlaw the practice, at least the moving the clocks forward part.

It’s a creative offering that both capitalizes on the season and a highly debatable practice. It’s interesting odds like these that help differentiate books from the pack.