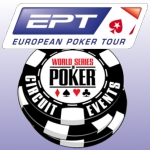 The final table at the first ever World Series of Poker Circuit Regional Championship is set. Wednesday saw 24 players still in the hunt at the Horseshoe Hammond outside Chicago, but only nine are returning on Thursday, and only one will go into the record books as the first ever WSOP-C Regional Champeen.

Meanwhile, across the pond at the EPT Vienna, Day 1b is in the books. Combined with Day 1a’s field, a total of 587 players bought in, with 278 remaining alive as we prepare for Thursday’s action. ‘Alive’ being the operative word, as no one has as yet led an armed assault on the venue, much to the relief of the local constabulary.

Laurence Houghton is the current chip leader, albeit by a very slim margin over Szymon Pieszczoch (who must be related somehow to Lynyrd Skynyrd) and Claudio Simaldoni. Also among the 278 left standing is former tennis star Boris Becker, currently residing in 129th place. The superstitious Becker, a Team PokerStars SportStar, doesn’t like to talk numbers when referring to his poker win/loss record, stating only that “I won more money than I lost so far.” The week is young, Boris…