Home / Sports / The most anticipated NBA opening day ever 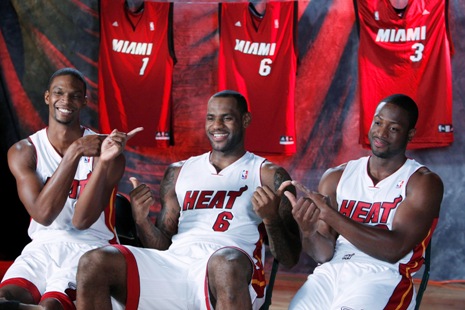 It’s finally here, after months of a drama filled NBA offseason in which the basic power structure of the league was completely overhauled, finally all the hype reaches its climax as the Miami Heat head to Boston to take on the Celtics.

It’s the first time game one of the NBA season has received this much attention since Michael Jordan returned for his first full season after that baseball experiment. Lebron James, Chris Bosh and Dwyane Wade comprise the Big 3 for Miami who have been the focal point of all media attention since Lebron decided to take his talents to South Beach.

The Celtics have re-tooled their veteran lineup with the additions of Shaq and Jermaine O’Neal and with their Big 3 they’re also preparing to make a championship run of their own. But with all the attention focussed on Miami, Boston will be looking to show that they are still a force to reckoned with.

Oddly enough, the other game for the NBA opening night features the Los Angeles Lakers who after winning back-to-back championships are starting this season looking to three-peat, but nobody seems to care about that. The Lakers have to feel a little shunned considering the fact they are the defending champions, and you know it just adds fuel to the burning inferno that is Kobe Bryant. So tonight all the smack talk will both stop and start up again, but at least players will be forced to back it up with their play.

Tonight marks a huge night for all sportsbooks. With this being the most anticipated and hyped NBA season bettors will be itching to get their wagers in. Any Miami Heat prop is a good prop, any Lebron James player prop is a great prop, you really can’t go wrong. With the Heat favored by most books to win the NBA Championship all eyes will be on their every game, win and loss. Boost up your NBA offerings and capitalize on the most anticipated NBA season ever.