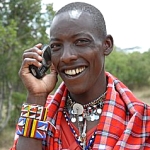 Many kids these days have never heard of a compact disk, let alone a ‘record’. If Kenya’s example is anything to go by, the next generation of kids probably won’t recognize the phrase ‘checking account’.

Less than 19% of Kenyan adults have a formal bank account, but 30% make use of cellphone-based mobile money transfer systems. In the three years since the launch of the first such system, Kenyans have transferred some $4.4B via something that is not yet officially considered banking by Kenyan regulators.

The system is free to set up, and so are deposits. Fees ranging from 30 cents to $5 are charged for various transactions. No minimum balance is required. Users can transfer up to $440 at a time, whether via deposits, withdrawals, bill payments, receiving paychecks from their employers, you name it. The agents who set up the accounts often use their own phones to process the requests – no computer or internet connection required.

In Kenya, only 1% of residents have a land line, but a whopping 70% have a mobile. As one Kenyan puts it, ‘we carry our money in our phones’. Sure, but at least with traditional wallets, there’s room for a condom or two.