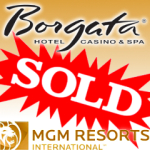 In July, MGM Resorts International sold the 11.3 acres of land underneath Atlantic City’s Borgata Hotel Casino & Spa to Vornado Realty Trust and Geyser Holdings for $73M. On Thursday, New Jersey gambling regulators gave the deal their stamp of approval. MGM also announced this week that an unidentified buyer had offered them $250M for their 50% share of the Borgata Hotel itself. Boyd Gaming owns the other 50%, and has the right of first refusal on any sale, plus 30 days in which to decide whether to purchase the other half of the building for themselves.

The fate of the Borgata began earlier this year when NJ regulators decided that Pansy Ho, MGM’s joint venture partner in Macau, was an unsuitable person due to her father Stanley’s alleged ties to Asian underworld figures. MGM was given an ultimatum to pick Macau or NJ, and MGM called NJ’s bluff, choosing Macau’s rising sun over Atlantic City’s increasingly cloudy future.