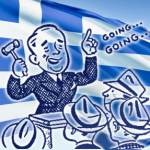 Greek gaming firm Centric has announced its intention to bid for an online gaming license in anticipation of the Greek government’s plan to liberalize its market in 2011. Centric, a partner of Sportingbet, has been offering online sports bets to Greek-language bettors in Greece, Croatia, Slovenia, Slovakia and Romania since 2007, but it would love to have the government’s knowing nod all the same.

Not only does Centric intend to apply for a license, it expects its application to be granted. Centric’s deputy chairman Vassilis Neiadas told Reuters that “if a Greek-owned firm listed on the Greek bourse, which declares 760 million euros sales to the state…can’t get a licence, then who can?” To sweeten the pot, Neiadas has pledged to move Centric’s operations to employment-starved Greece once the license is granted.

As the Greek economy tanked, Centric’s net profits went with it, dropping 13.6% during the first six months of 2010, but Neiadas claims this will be partly offset by the company’s 49% holding in Swedish Unibet’s partner Usmar Management and the acquisition of a 20% stake in a Greek gaming software distributor. The company also has ‘a very ambitious plan’ to take advantage of foreign investment firms sniffing around potential Greek licensees ahead of the market liberalization.