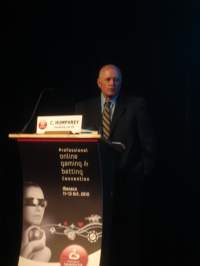 When you get to a place in the world and you’re left wondering how much the guy in front of you just shared a lift with might be worth, whether he has 7 or 11 yachts, or how many bottles of Cristal he sank last night, there’s not a long list of places that you might be, however, one of those places is home to the world of iGaming for the beginning of this week, Monaco.

Held in the plush riverfront location of the Grimaldi Forum, the Monaco iGaming Exchanges is in its first year, and the opening day’s proceedings didn’t disappoint. Anywhere that allows you to check into a hotel and then bump into one of the most well-known sports persons ever has got to be good, right? Even if you’re not exchanging glances with Franz Beckenbauer the fact that just over the bay is a grouping of billion pound/dollar/euro yachts is enough.

Onto to the conference’s first day and it being the first year no-one really knows what to expect. The event is comprised of the exhibitors themselves, and a number of round table discussion on hot topics of the gaming world right now.

The opening round table was chaired by the recently hitched Michael Caselli, who led a meaty debate on the International Online Gaming and Betting Market, focusing primarily on Europe, including how legislation is shaping the future of the marketplace. Denmark, home of blonde women and a lager which promises that if they did…they’d probably be the best in the world. Mr Verbieste seemed to also concur with this, and his discussion did in fact suggest that Carlsberg will probably have something to do with the creation of this new law.

Caselli’s table also gave us information on the French and how an estimated 100million euros have been spent on advertising thanks to the news regulations, and Manuel Silva of Sporting Bet pointed out where me, and many others besides are going wrong – we have an emotional attachment to the clubs involved (needless to say it wont be the last time I wrongly bet on my team, I’m sure)

After a short break, there was a particularly interesting discussion on the state of the iGaming market in the USA, and who the winners will be. Chaired by Commander Wendeen Eolis – cant help thinking of war when hearing that title – the discussion included two extremely eminent speakers on the subject, Professor I. Nelson Rose, who’s written more books on American Gaming Law than I’ve had hot dinners, and an attorney specialized in Gambling Law, Chuck Humphrey.

Rose pointed out the inadequacies that are present in the UIGEA, which still no-one knows how to pronounce properly, and the fact that states are so desperate for money that they’re willing, in the case of California, to legalise marijuana in order to get some dollar.

After the debate had concluded there was the chance to chat and gain each of their separate viewpoints on where the markets will go in the future, and a more in-depth look at this can be found in the video that will be available back here later in the week.

Checkout the picture gallery in here.

Big One For One Drop Moves to Monte Carlo Proving Charity is the Star; Not Poker
Lee Davy
12 July 2016
.