Home / Poker / Big One For One Drop Moves to Monte Carlo Proving Charity is the Star; Not Poker 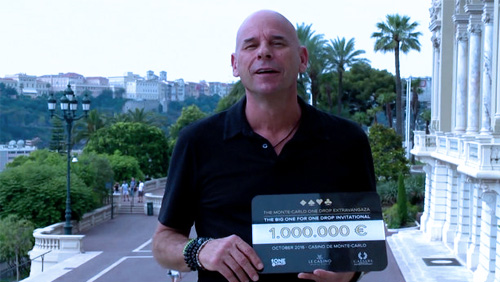 The World Series of Poker and the One Drop Foundation has announced plans to host the third iteration of the Big One For One Drop but with a twist. The event will be held in Monte Carlo, it will be an invitational, and professional poker players will not be invited proving that charity is the star; not poker.

In 2007, Guy Laliberte, the founder of Cirque du Soleil, created the ONE DROP Foundation, a Montreal based non-profit with a vision to provide every inch of this planet with a clean and accessible water supply.

“One person dies every 20-seconds from not having access to clean water. That is how and why the ONE DROP was born,” Laliberte told Green Global Travel during a 2013 interview.

In 2012, Laliberte, a keen poker player, teamed up with the World Series of Poker (WSOP) to create an ambitious plan to host the largest buy-in event in the history of poker – a $1m buy-in event called The Big One for ONE DROP with $111,111 from each buy-in being donated to the ONE DROP Foundation.

“I was a skeptic,” Caesars Interactive Entertainment’s Seth Palansky tells as we discuss the tournament in the Rio, “I didn’t think you would get a table of nine players ponying up $1m. It seemed far fetched especially with the 11.1% charitable donation to it.”

“In fairness to Guy {Laliberte} I don’t swim in the same circles and he has a better sense of the affluence, businessmen, and that sort of thing.” Said Palansky before continuing, “It was a great success in Year 1, and at the end of the day we viewed it as a charitable initiative. The event raised over $6.5m that first year and we have seen the legacy project in El Salvador first hand. That’s what I get out of it.”

The final table consisted of six professional poker players and three non-professionals. One of them, David Einhorn, finished third and donated his entire $4,352,000 prize to the ONE DROP Foundation.

The heads-up battle between Antonio Esfandiari and Sam Trickett will go down as one of the iconic moments in the history of poker as the two Titans battled it out for over $23m in prize money. The poker world had never witnessed anything like it and after Esfandiari won the $18,346,673 first prize, everyone wanted to know when we would see something like it again?

“We thought of it as an Olympicesque event to be held every four years,” says Palansky, “We didn’t think there was enough money in the poker economy to do this regularly. But take a look at what has just happened in the $111,111 ONE DROP High Roller. We got 183 entrants, including 38 re-entries. That’s $222,222 gone just like that {clicks his fngers} -that’s a pool of 150 players.”

The poker community only had to wait two more years before the WSOP  and the ONE DROP Foundation would do it all again. This time the event attracted 42 entrants, and only two of the final table participants were non-professional poker players.

And then something unexpected happened.

The winner of the event, Daniel Colman, refused to celebrate his win. The photograph of him standing stoically behind $15,306,668 is as iconic as the event itself only for all the wrong reasons. It was the only photograph Colman allowed the WSOP to take. He refused all interviews, leaving a gobsmacked runner-up, in the shape of Daniel Negreanu, having to do all of the media work.

Colman would later tell the poker playing public that he didn’t ‘owe poker a single thing,’ and that it’s ‘not a game where the pros are always happy and living a fulfilling life,’ and saying, ‘he would never in a million years recommend for someone to try and make it as a poker pro. He finished his statement by stating that although he loves the strategy part of the game, ‘I do see it as a very dark game.’

That doesn’t sound very charitable does it?

To be fair to Colman, he did visit El Salvador as a ONE DROP ambassador and by the very definition that also makes him an ambassador of poker. He also publicly supported the work that the ONE DROP Foundation carried out. But the negative press that came with his stance did very little to showcase the charitable aspect of the tournament despite raising close to $5m.

The One Drop Moves to Monte Carlo

Rumour of a 2016 Big One for ONE DROP event has been circulating for some time. I first heard about it several months ago when I was told it would form part of a World Series of Poker Europe (WSOPE) festival in Monte Carlo.

When the official news broke the rumours were partly true. Monte Carlo will be the location of the third Big One for ONE DROP. However, it won’t be part of a WSOPE Festival, it will be an invitational, and most surprisingly invites will not be sent out to professional poker players.

I thought the WSOP were going crazy. How could you have the world’s largest buy-in poker event without professional poker players taking part? The blinkers were well and truly on.

“The main thing for the WSOP is that our games are played by the people who can afford to play them.” Says Palansky. “Begging, borrowing and stealing to get yourself into an event because it’s a positive EV thing; or a great opportunity; or a juicy game mentality. We don’t want that to be the thing. This event is for people who can afford to lose a million bucks. It wasn’t designed with the poker player in mind and we were surprised by the number of professional poker players who competed in the first two events. First and foremost this is a charitable initiative.”

The blinkers are off.

I can see his point of view, especially as it became common knowledge that most poker players were only playing for small parts of themselves, some of them freerolling, with businessmen putting up most of the money.

“It’s hard for us to parse what is reality. The goal was not to take $20m out of the poker economy and then players couldn’t play poker for the next 20-years because of this event. This level of a buy-in is meant to say, ‘Step up into this game if you are a charitable individual and you won’t lose too much sleep over it if you lose’. That’s why we pressed the reset button. We want to bring in characters from entertainment; sport and individuals with a high net worth and not necessarily the poker players.”

The Monte Carlo ONE DROP Extravangazna will run Oct 13 – 17, 2016. The Casino de Monte Carlo will host the event. The €1m buy-in means it is the largest buy-in event ever held. €111,111 of each buy-in will go towards the ONE DROP Foundation, and the rest will go directly into the prize pool. Day 1 will consist of unlimited re-entries, meaning we are likely to see at least one player punting off millions of euros, and the winner will receive a ceremonial bracelet hand-crafted in platinum by famed jeweler Richard Mille.

Even Prince Albert II is looking forward to the event saying he was ‘pleased’ that Monaco had been selected to host the 2016 edition calling the ONE DROP Foundation, ‘a cause I hold particularly dear.’

So will we ever see professional poker players competing in the ONE DROP ever again?

Has Daniel Colman blown it for every poker player who had this added to their bucket list after seeing Antonio Esfandiari’s head hit the roof of the Rio after his win?

It won’t have helped.

“Will there be a 2018 iteration and what will it look like?” Says Palansky. “We’ll see. It is an invitational. We’ll see how many people turn up. Will the businessmen like playing against businessmen? There will be a coaching aspect where pros can get involved. We want to make sure that the poker community is known for doing good charitable initiatives and we continue those efforts without doing something that harms the poker players and community as a result.”

So no definitive answer from Palansky, but listening to him talk passionately about this amazing event, I am reminded of two things: this poker tournament saves people’s lives, and poker players like Antonio Esfandiari and Dan Colman were never meant to be the stars of the Big One for ONE DROP; charity was always supposed to take that starring role.