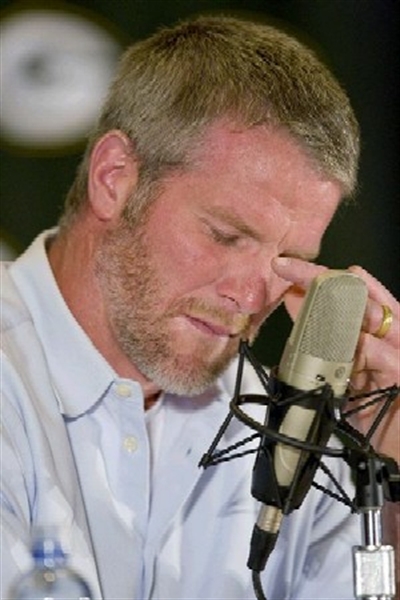 This isn’t a new story. Back when Brett Favre played for the New York Jets, he met a bubbly reporter who looks a lot like his wife and he started sending her pictures of his unit, these aren’t new facts. The twist in the story is that now the NFL is actually getting involved.

The question that needs to be asked is not why the NFL is getting involved, but why does everyone in the world know that Brett Favre sent, what were obviously intended to be private pictures of his johnson to Jen Sterger? Why do we know who the hell Jen Sterger is? These answers and more are all part of the curse that has now been placed on the American Powerful Man/celebrity and the bulls-eyes they carry on their backs, one that is spreading world wide to all powerful men and big name celebrities. We’ll come back to that.

After key words like Jen Sterger pics and Brett Favre scandal have littered the internet for the past week, I guess there’s a certain amount of hits required before Roger Goodell has to step in. Goodell has made it clear that the league will determine if Favre should be punished once they complete their investigation.

I have a huge problem with this. I feel like Brett Favre is being set up. Did he harass her? Did he assault her? It sounds like it was an friendly relationship, especially when Favre is on tape just leaving messages to ask how her day was… Okay, no, you can’t go around sending cock shots, but have we stopped to ask how he got her cell phone number in the first place? Obviously there was some sort of relationship going on there, but again, cock shots were probably never part of the deal. Regular people, regular guys, can send girls cock shots all they want, but even a regular guy might be pushing it if he sent one to a co-worker…though, it’s been done…Bottom line, some girls like cock shots, and depending on how rich and famous you are, some girls don’t.

My point is, we’ve seen this before. I’m not calling Sterger a money grabbing ho, but I am saying the latest trend these days is for money grabbing hos  who attract big name celebrities to make serious amounts of money by exploiting that powerful man through the media. In turn, the hot woman becomes famous or infamous, it doesn’t seem to matter and she gets rich and often times, she herself now becomes a big name celebrity.  For the record, who is Jen Sterger and what is her talent? From all accounts, she was discovered while being scantly dressed at a college football game? I guess you can’t knock the hustle.

We see it time and time again, and as I’ve said before, the Woods case opened the floodgates, but it’s accessibility to information via the internet that makes this possible. If you’re a powerful man, or a big name celebrity, you can’t have sex with hookers, working girls, you can’t make passes at certain beautiful women anymore, you really have to be careful in how you get down, because it appears your downfall has a pricetag. These days, rappers can’t even take down working girl groupies without the girl taking it to the internet to gain some sort of publicity. It’s getting ridiculous.

You can’t tell me that back in the day a guy like Brett Favre would consider that if he made a pass at a sideline reporter, that she would even remotely consider smearing his name. There’s no way, in fact this isn’t Favre’s first rodeo, I don’t doubt he’s done that type of thing before. But back in the day, he could have sent her pictures of him flogging himself and she might have saved them under her pillow. Things have changed, and sadly for powerful men, it’s for the worse.

Now I’m wondering if other cock shots of Favre are going to surface on internet, what are the odds of that? I’m also wondering if this is all Favre needs to get going this year, because he’s from the old school and there’s one surefire way to evade all punishment and scrutiny for anything you’ve done, and that’s win baby, win!