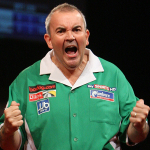 Phil ‘the Power’ Taylor is through to the semi-finals at the Bodog.com World Grand Prix after coming from behind in sensational fashion to defeat Gary Anderson 4-3 in front of a raucous Dublin crowd on Friday. Anderson led 2-1 and 3-2 but Taylor nailed six straight legs to take the final two sets and stay in the hunt for what would be his 10th Grand Prix darts title.

Said Taylor, after the fact: “It was a great game to be involved in. Gary was brilliant and hit some fantastic shots, and he pushed me all the way. This has set me up to hopefully go on and keep this title now because it was a really high standard.”