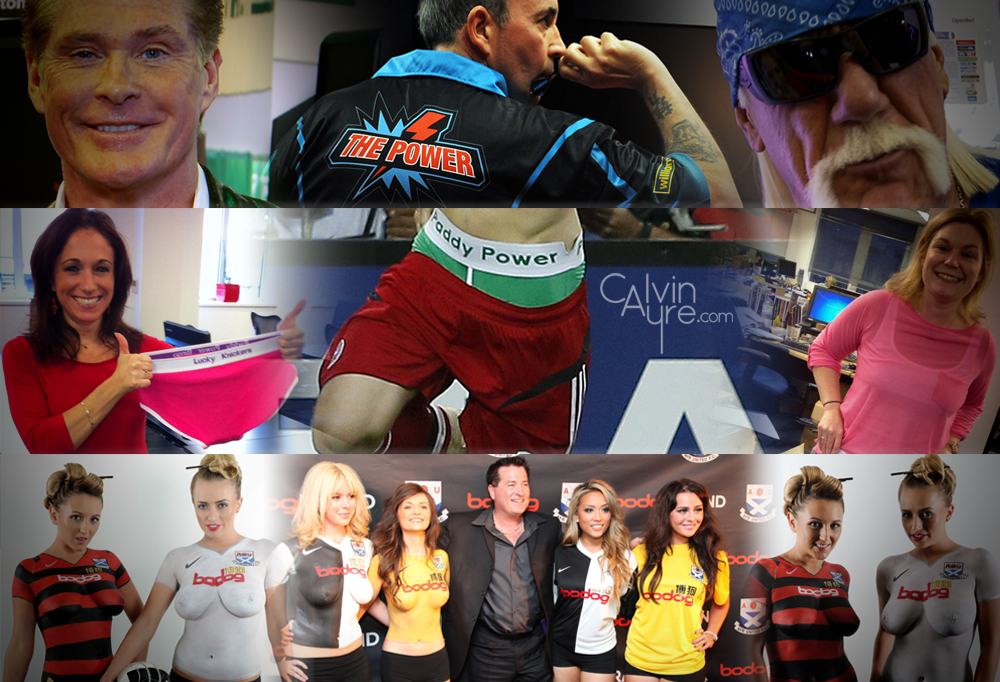 Celebrity endorsements are coveted by anyone who is selling anything.  The masses love celebs and nothing causes a commotion like an A-list celeb attending a gambling trade show. OpenBet hosted Darts Pro Phil Taylor and Hulk Hogan to ICE totally gaming 2012 which immediately populated social media and grabbed the attention of every media company on sight.  For G2E 2012, OpenBet hosted The Hoff at their booth, causing an even larger stir as the crowds lined up for pictures, autographs and interviews.

Paddy Power is known for their incredible (and sometimes even controversial) PR stunts.  This year Paddy Power arranged for Danish striker Nicklas Bendtner to wear (and flash) a pair of Paddy Power lucky pants during a Euro 2012 match.  He was fined a rather large amount for doing so, but that story certainly made its rounds.

On a much smaller scale, a Paddy Power affiliate manager put on a pair of the infamous lucky pants and streaked through the Barcelona Affiliate Conference expo floor.  Lucky for us, a pair of lucky pants had been placed in each delegate bag so we can now streak on our own.  Ladies, due to popular demand, the Paddy Power Bingo Lucky Knickers are now available too.

Cleverly coined by The Daily Mail as the “Breast kit ever”, Bodog’s revealing of the Ayr United Jerseys as painted versions on two topless ladies was an absolute bang for the buck.  This relatively inexpensive stunt earned coverage across a dozen sports, news and tabloid sites across Europe and gave the Honest Men something to smile about…and stare at.

So maybe the purchase of Full Tilt by Stars was not an “official” PR stunt, but it sort of was, wasn’t?  We all know Stars doesn’t need the database of players or the software, but they came out of this deal as the ultimate good guys and EVERYONE was talking, writing and reporting about it.  As usual, a job well done PokerStars.

In a campaign to drive traffic to Jackpotjoy’s new facebook FUNdation app, parent company Gamesys commissioned a huge yellow rubber duck to float down the Thames and sail under an opened Tower Bridge.  The duck story made its way quickly through the masses via facebook causing a buzz before anyone knew the official floating duck story – what better way to promote a new facebook product?