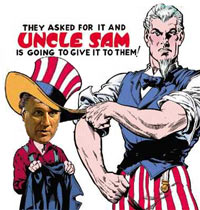 The United States of America celebrates its 231st birthday today. While the rest of the nation attend barbeques and shoot off fireworks in celebration of Independence Day, internet gamblers across the United States are attempting to regain their sacred freedoms and asking each other: Does America still stand for liberty?

I think it is a valid question in this day and age considering that liberty was the pillar of our struggle for independence in the first place.

Tolerance of gambling within the United States has come and gone in cycles over the entire history of our young democracy. The original Puritans left England in pursuit of religious freedom, settled the New England colonies and outlawed the practice. While other colonies considered it something suitable for gentlemen as a form of recreation and diversion.

Ben Franklin, John Hancock and George Washington were all prominent sponsors of specific lotteries for public works projects and all 13 original colonies established lotteries. At one point, playing the lottery became a civic responsibility. Proceeds helped establish some of the nation’s earliest and most prestigious universities such as the college of William & Mary, Harvard, Yale, Columbia, Dartmouth and Princeton.

The Founding Fathers of the United States of America are turning over in their graves right now because the very liberties they fought to establish and preserve are being trampled on by the current Bush Administration. If you don’t believe me, just checkout some of their own words and draw your own conclusions.

“But of all the views of this law none is more important, none more legitimate, than that of rendering the people the safe, as they are the ultimate, guardians of their own liberty.” Thomas Jefferson 1781

The author of the Declaration of Independence, Thomas Jefferson, clearly believed that people are able to make their own decisions about what is good or bad for them instead of relying on the government to do so. It is legal to play poker at numerous card rooms throughout the United States, you are able to play Black Jack in Atlantic City and bet on sports in Las Vegas. Why should it be illegal for hard working tax payers to do these activities in the privacy of their own homes?

“Those who give up essential liberties for temporary safety deserve neither liberty nor safety.” ~ Benjamin Franklin

This quote from Benjamin Franklin brings into context what has been going on since 9-11. The civil liberties of my fellow American citizens and tax payers are being trampled on in the name of the “War on Terror”. Let me be the first to say that President Bush has done a fabulous job in preventing attacks on the homeland and for that he should be commended. However, Arizona Senator Jon Kyl would like to scare you into believing that associates of Osama Bin Laden are betting on the Utah Jazz in an effort to launder money. A more likely scenario is that terrorists are coming into Arizona from Mexico.

Kyl should be more concerned with preventing potential terrorists from crossing the Mexico/Arizona border and getting comprehensive immigration legislation passed than worrying about me betting on how many hot dogs Takeru Kobayashi will eat today at the Nathan’s Hot Dog Eating Championship.

“Arbitrary power is most easily established on the ruins of liberty abused to licentiousness.” – George Washington 1753

After reading this quote from George Washington, I cannot help but think about what Jon Kyl and his buddy, former Republican Senator Majority Leader Bill Frist, perpetrated on the last day of the 109th Congress. The pair successfully tacked the Unlawful Internet Gambling Enforcement Act into the unrelated Port Security Act knowing that it would be political suicide to vote against the legislation. No one wanted to look weak on terror a month before the November 2006 elections. It is clear that both Kyl and Frist have no regard for the accepted rules or standards in the legislative branch of government.

“America will never be destroyed from the outside. If we falter, and lose our freedoms, it will be because we destroyed ourselves.” – Abraham Lincoln

The passage of the Unlawful Internet Gambling Enforcement Act in 2006 was a clear attempt by the minority view to ban something they deem inappropriate. The law has already been referred to as the “stupidest law every passed” by Barney Frank, the Chairman of the House Financial Services Committee and for good reason.

Passing “stupid” laws that take away individual freedoms and liberties serves no purpose but to hurt the country as a whole. UIGEA does not prevent people from gambling online and does not make internet gambling illegal. What it does do is make it illegal for financial institutions from knowingly processing financial transactions related to internet gambling.

The banking industry has already voiced its displeasure with UIGEA, but Kyl and others did not want to hear it. Kyl’s legislation does nothing more than push gambling underground and it hinders banks from identifying the real terrorists. Do you think it is a wise allocation of resources to have Bank of America’s security department searching for $25 dollar parlay bettors?

Frank, Robert Wexler, Shelley Berkley and others are the true patriots of this nation because they stand up for our rights. Kyl and his cronies are only interested in removing the rights of Americans. Since history often repeats itself perhaps Kyl can revisit an eighth grade history book and read how prohibitions only create criminal elements. Al Capone would love people like Senator Kyl.

Then there is the WTO’s internet gambling ruling in favor of Antigua & Barbuda over the United States. Instead of complying with the WTO ruling, Washington decides to pull out of its 1994 GATS Treaty commitment saying it never intended to include gambling when it signed the agreement. What kind of message are we sending to the rest of the world and more specifically China when we back out of our commitments under international law when we do not get our own way?

Meanwhile, the European Union, Canada, Australia, Macau, Costa Rica and Japan joined Antigua & Barbuda in asking the United States for billions of dollars in annual compensation for backing out of their commitments under the GATS Treaty. Not only are we going to lose potential revenue streams from taxing internet gambling, but we have to pay other countries billions of dollars because we will not officially open the market up to foreign competitors. Talk about a flawed policy that in the end will cost the American tax payers billions!

“The only tyrannies from which men, women and children are suffering in real life are the tyrannies of minorities” – Theodore Roosevelt 26th President of the United States

Millions of Americans desire to gambling online and do so. According to Christiansen Capital Advisors (CCA), nearly 23 million people gambled on the internet worldwide in 2005 and 8 million of those gamblers were from the United States with gross gambling revenue of $5.9 billion in 2005.

At $5.9 billion, the United States government would have collected a ton of tax revenue from the industry. Everyone should realize it is about the money. Who gets it, who doesn’t. The field is being leveled and the first state ready to benefit the current prohibitions efforts is Nevada. The state has already enacted legislation to regulate the internet gambling industry once the federal ban is lifted. Notice I say “when” because it is inevitable in my opinion.

“Unthinking respect for authority is the greatest enemy of truth.” – Albert Einstein

While Albert Einstein was not a Founding Father of this country, he was a pretty smart guy. Anyone that gambles online should become engaged in the issue if they would like to continue doing it. Point-Spreads.com urges our readers to seek out and support politicians that believe in the regulation of every form of internet gambling. Let your voice be heard, you are the ones that have lost money at BETonSPORTS and have money tided up in NETeller. Share the responses with other voters you know with like minded interests.

“This and no other is the root from which a tyrant springs; when he first appears he is a protector.” – Greek Philosopher Plato 428-348 BC

A wise Plato warned several generations of Greeks and several leaders of the Roman Republic with this historic quote, which has the same meaning today. Republicans such as Arizona Senator Jon Kyl, former congressman Jim Leach and religious groups like Focus on the Family & CitizenLink.org want to protect us from the dangers of gambling. Yes, I would agree that a very small percentage of gamblers become addicted to gambling but the same argument can be made for alcohol or practically anything else for that matter. Prohibition did not work for alcohol and it will not work for internet gambling.

Senator Jon Kyl actually believes he improved the lives of Americans the day he tacked UIGEA onto the Port Security Bill by saving us all from ourselves. Kyl and others will not stop unless the are stopped with new laws overturning arcaic ones or by being voted out of office, something Jim Leach knows all about. It was widely reported in the mainstream media that a pro-internet gambling group mobilized and cause the demise of Leach as he was voted out of office in the November 2006 elections, the month after UIGEA was signed into law by President Bush.

“The liberties of our country, the freedoms of our civil Constitution are worth defending at all hazards; it is our duty to defend them against all attacks. We have received them as a fair inheritance from our worthy ancestors. They purchased them for us with toil and danger and expense of treasure and blood. It will bring a mark of everlasting infamy on the present generation – enlightened as it is – if we should suffer them to be wrested from us by violence without a struggle, or to be cheated out of them by the artifices of designing men.” – Samuel Adams

We have American troops dying every day in Iraq while they defend our freedoms and liberties. These men, women and their families are making the ultimate sacrifice for us. Once these guys come home, they will not be able to play poker online. The current administration distributed a deck of playing cards to the troops fighting in Iraq. Each card in the deck had a photo of a wanted Saddam Hussein regime member. Saddam was the Aces of Spades, the highest card in the deck.

What do you think the troops did with those cards? Played Black Jack, Poker or Spades and I am sure a few of those games had money being wagered on them. What else are these guys going to do in their free time, they were encouraged by their superiors use the deck of cards.

That marketing campaign by the Department of Defense was more effective at creating degenerate gamblers than anything done by the internet gambling industry.

“The Framers [of the Constitution] knew that free speech is the friend of change and revolution. But they also knew that it is always the deadliest enemy of tyranny.” – Hugo Black American Lawyer & Politician 1886-1971

In the spirit of Hugo Black, Point-Spreads.com will continue to speak out and publish articles pertaining to the United State’s “War on Internet Gambling” because we feel it is our duty to expose tyrants such as Arizona Senator Jon Kyl.