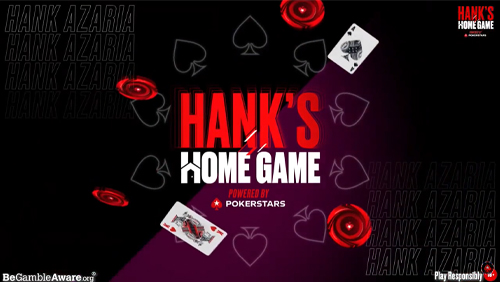 It’s often a risk commissioning a new show for any platform. That’s why you often see the same sorts of series pop up. A disgruntled detective with a drink problem? It’s worked before. A dysfunctional family who snip cynical put-downs at each other? Why change the habit of a TV production lifetime? But in terms of poker on screen, it can often be exactly the same.

Gangsters chucking cards at each other, East End bad boys risking the roof over their head on four of a kind? We’ve all seen these poker tropes before.

So why does Hank’s Home Game on PokerStars feel like a fresh take on the celebrity cash game format that has been around since the 1980’s?

For one, the stars of the show are pretty impressive. There’s Hank Azaria, star of The Simpsons, of course, but he’s by no means the only big name. He’s joined in Episode 1 by Josh Charles, Jon Hamm, Michael Cera, Michael Ian Black and Don Cheadle – a stellar line-up of superstars.

The aim of the game was simple – win the most money at the table and it translates into money for charity, with a $20,000 top prize.

With plenty of banter and the European Poker Tour dream team of James Hartigan and Joe ‘Stapes’ Stapleton providing commentary and their considerable interviewing skills, it’s a great watch. The talk about movies might be sporadic, but surprises do pop up and delight you.

There was enough at stake for play to actually get competitive, too, although this was bookended by both a slower beginning and an ending which became a bit of a shove-fest. Players didn’t seem to know when it was the last hand, either, but fear not, we did and here’s how the first episode ended up after a dramatic final hand went to Michael Cera to book the win.

You can look up all the charities in question right here by heading to:

If you enjoyed Hank’s Home Game, then there’s some good news, as the show will be back. You can follow PokerStars on YouTube, subscribe and you’ll get a notification whenever Hank decides to get the band back together.

It’s sure to be a whole lot of fun!