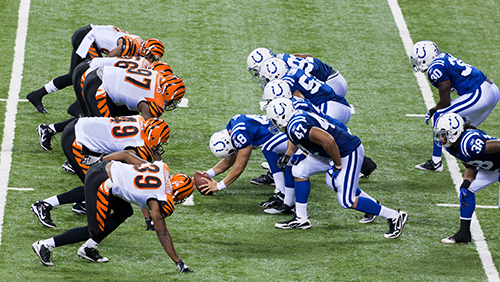 It could be said that the NFL games featured on Thanksgiving Day yesterday were not among the most popular ones that could have been selected, but they both still proved to keep football entertained. With COVID-19 keeping holiday plans to a minimum, at least there was a great way to spend several hours watching four teams tear it up on the gridiron. If it hadn’t been for the Baltimore Ravens, there would have been six teams.

The Detroit Lions, featuring Matthew Stafford and his record for most Thanksgiving Day yardage, and the Houston Texans met up yesterday, and the game started with the Lions jumping out to a 7-0 lead a little more than halfway through the first quarter. The Texans responded almost immediately, thanks to their big defensive man J.J. Watt, who snagged a Stafford pass out of the air and ran it into the end zone for a touchdown. As the Lions got the ball back following that embarrassment, they fumbled on the series and the Texans scored another TD – two in about a minute and a half. Before heading to the lockers for the mid-game break, the Lions would rack three consecutive turnovers.

After that, it was a Texans ball game for the rest of the afternoon. Starting in his first Thanksgiving Day game as quarterback for Houston, Deshaun Watson ended his day with four touchdown passes and a passer rating of 150.4, the fourth-highest for Thanksgiving NFL football. Detroit continued to become unglued in the second half, and all the team could do was try to hold on until the clock ran out. By the time it did, they were looking at a 41-25 loss.

The Washington Football Team continues to fight in order to show its appreciation for head coach Ron Rivera, who has been battling cancer. As they took the field against the Dallas Cowboys yesterday, they showed no mercy. The defense sacked Cowboys quarterback Andy Dalton three times, intercepted him once for a touchdown and otherwise just had one of the best games it has had all year. The offense did an excellent job, as well, with rookie running back Antonio Gibson recording 20 carries for 115 yards and three touchdowns.

It wasn’t just a superior Washington team that won the game, though. It was an inferior Cowboys team that made a number of mistakes and seemed to never get organized as it ended up recording a 41-16 loss. The defense was, in a word, deplorable and quarterback Andy Dalton, filling in for Dak Prescott after his season-ending injury a few weeks ago, couldn’t get in sync with his receivers. To be fair, the Dallas squad is dealing with the sudden death of its strength coach, Markus Paul, this week, but the team needed to come together and fight through the grief.

This was a game between two rivals in the NFC East, the only division to have all four teams showing losing records this year. It is also the only division to constantly see lead changes, with yesterday’s win by Washington putting it on top, slightly ahead of the Eagles, who were leading just two weeks ago. A few weeks before that, in Week 5, Washington was third and Dallas was second. Now, Dallas has dropped to last place.

The third game that should have taken place yesterday was to feature the Baltimore Ravens and the undefeated Pittsburgh Steelers. This was a highly-anticipated game between two AFC North rivals, but the Ravens have apparently had difficulty adhering to NFL COVID-19 policies. Over ten players and staffers tested positive for the coronavirus earlier this week, and the game had to be rescheduled to this Sunday. However, several more positive tests then came back, and it’s possible the game could be taken off the schedule once more. Should that happen, there is talk that maybe – just maybe – NFL fans could expect to enjoy a Week 18 this season.