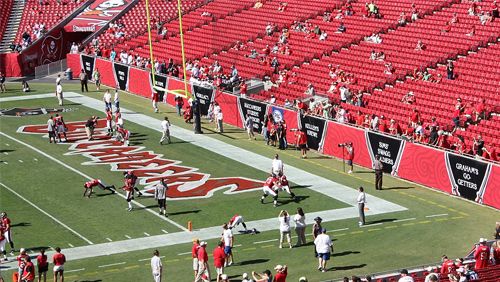 Last night on Monday Night Football, two NFC teams faced off to close out Week 8 in the NFL. Of the two, one sits at the bottom of its division at 1-7, while the other is in command of its division with a solid 6-2 lead. While almost everyone thought the game might be a blow out in favor of the leading team, if this year’s NFL season has taught us anything, it’s that nothing is ever a lock. The New York Giants, with a 3-4 record in the NFC East, gave the NFC South-leading Tampa Bay Buccaneers a lot more trouble than anyone expected.

The Bucs put the first points on the board, a field goal to take a 3-0 lead. However, things went a little sideways from there, as quarterback Tom Brady found himself trying to mount a comeback after falling 11 points behind. The Giants came out with both guns blazing in the first half, holding the Bucs to just six points, and kept the pressure on Tampa into the third quarter before the Bucs were finally able to get into the end zone for a touchdown.

Two Bucs interceptions in the second half gave the team a boost, but it wasn’t a pretty game. The Giants continuously threatened the Bucs and led the game in total yards, as well as first downs. Tampa was forced to punt three times and added a turnover to a game that had underdog-pickers thinking they might cash in big time until the very end.

It could honestly be said that the Bucs were able to win because of Brady, whose veteran status allowed him to keep his cool and stay calm under pressure. He found Rob Gronkowski and Mike Evans to pick up touchdown passes, moving into first place on the list for most career TDs in the league. He now has 561, having overcome New Orleans Saints quarterback Drew Brees, who previously held the record with 560.

The Giants defense proved to be much stronger than the Bucs had prepared for, repeatedly stopping Tampa from making real progress on the field. Even after tossing an interception that gave the Bucs the ball with good field position, the Giants defense held the Bucs back and forced them to settle for a field goal. Tampa would make up the difference in the subsequent series of downs, but it was obvious that the team was struggling.

The Bucs finally found the advantage when they went up 25-17 with the clock under four minutes, thanks to yet another field goal by kicker Ryan Succop after being denied a touchdown. However, they were once again threatened by a 70-yard push by the Giants that led to a Golden Tate touchdown with just under 30 seconds left on the clock. Now facing a 25-23 score, the Giants went for the two-point conversion to tie the game but fell short on what some have asserted was a missed pass interference call. That will be debated for the rest of the season, but the Bucs were given the win and now sit comfortably – albeit perhaps precariously – in second place in the NFC. The Giants, on the other hand, have to be given credit for making things difficult for the Bucs.