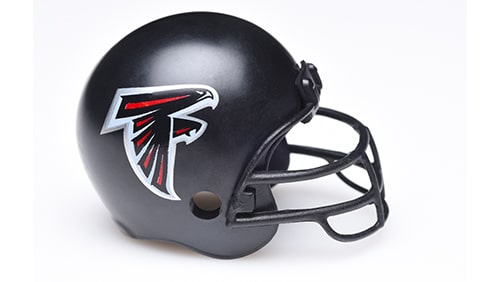 If ever there were a time that the Carolina Panthers needed the services of running back Christian McCaffrey (CMC), it was last night against the Atlanta Falcons. Thursday Night Football in the NFL found these two NFC South teams pitted against each other, and the Falcons figured out the secret to stopping the Panthers offense, with CMC still out due to injury, almost from the start of the game. By all counts, it wasn’t a pretty contest, but the Falcons found their revenge after losing to the Panthers earlier in the season, and also found a little vindication after having become the butt of jokes for losing several games after having put themselves in a winning position.

The Panthers came out strong, but weren’t able to keep their offensive stamina up throughout the game. For the Falcons, they were able to continuously exploit Carolina’s defensive secondary to drop long passes right on their targets, leading to Matt Ryan picking up 281 yards in the game. The quarterback also ran into the end zone for his own touchdown, the first of the season, as the Falcons hammered away toward a 25-17 victory.

While the Panthers secondary seemed to be a little dazed and confused, overall, the defense did a decent job. Most of the Falcons’ points, with the exception of the touchdown by Ryan and one more by running back Todd Gurley, were off field goals. The Panthers were able to keep the Falcons from reaching the end zone throughout the game, but Ryan’s ability to find open receivers had done its damage – Atlanta repeatedly got close enough to allow Younghhoe Koo to kick the ball through the uprights. He went four-for-four on field goals, but also managed to miss a point-after kick that almost proved to be costly.

With just a little more than a minute left in the game, the Panthers and quarterback Teddy Bridgewater had a chance to threaten the Falcons, and Atlanta fans had to be stressing after watching their team give up several games this year after having a comfortable lead. However, cornerback Blidi Wreh-Wilson would save the Falcons by way of an interception, allowing Atlanta to capture just its second win of the season.

In what will forever be the asterisk for the game, Bridgewater took a hit in the third quarter that might have changed the way the Panthers offense played for the rest of the second half. The quarterback was intentionally tripped as he was forced to scramble out of the pocket, forcing him to the turf. At the same time, Falcons defense end Charles Harris came in like a missile as Bridgewater was down, delivering a blow to Bridgewater’s head that led to concerns that he suffered a concussion. It also led to Harris being ejected from the game. Some might say that the Falcons were only able to win the game because they resorted to cheating and dirty plays.

That’s not entirely true, though, as the Falcons were on point all night, while the Panthers offense was not. Atlanta controlled the ball and the clock, while Carolina repeatedly ran into trouble. The Panthers had a difficult time on each down and left gaps that allowed the Falcons to pick up three quarterback sacks. Repeated fourth-down conversions failed – Carolina only got one of three tries – and third-down efficiency was just 20%. The team’s two star wide receivers, D.J. Moore and Robby Anderson, racked up only 103 yards – combined. The Falcons outplayed the Panthers throughout the game and the final score reflects the performance.