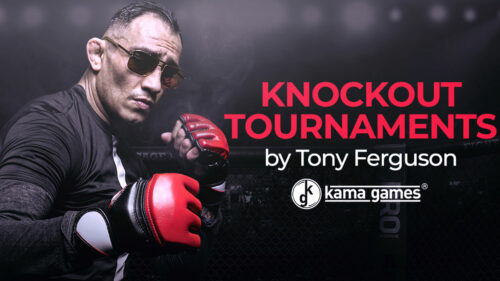 UFC star Tony Ferguson features as the face of this latest Pokerist launch which utilises one of the most popular tournament templates in online poker, Knockout Tournaments. Ensuring that there’s something to suit all skill levels and preferences, players will have the chance to engage with several different versions of the Knockout Tournaments such as Sit’n’Go, MTT and Progressive MTT tournaments.

KamaGames has a demonstrated history of innovation in the social casino market and bringing that commitment into 2020, the company is the first social casino developer to introduce these tournaments to players, further adding to their growing advantage over competitors.

At present, these tournaments host a variety of engaging mechanics with even more to come in the remainder of the year. In Sit’n’Go Knockout and MTT Knockout, players will be rewarded for taking a prize-winning place among their competitors. However, the rewards don’t end there. Any player who eliminates a rival from the competition will find themselves gifted with a predetermined special prize.

An added enticement for players to engage with Knockout Tournaments is the presence of UFC superstar Tony Ferguson. Following a successful partnership between KamaGames and the MMA athlete in early 2020, Ferguson has come on board to become the face of these tournaments. Ferguson’s unique brand of winning focus and competitive nature will be felt throughout the game, pushing players to give their all in the name of victory.

KamaGames CEO, Andrey Kuznetsov, commented on the Pokerist launch saying, “Knockout Tournaments are just the latest example of KamaGames being the first to successfully bring real-money casino mechanics to the social casino market. We did this already with MTTs and Social Sports Betting with great success and we will continue to innovate in this manner. Whilst we’re excited about this launch, we’re equally delighted that Tony Ferguson will once again be bringing his star power to Pokerist. KamaGames hope to continue to work with relevant partners such as Tony and craft long-lasting strategic partnerships for the remainder of 2020.“

With large segments of the global population still in isolation due to the pandemic, more than ever gamers are vying for interesting takes on the casino games they love. KamaGames is the expert in this form of innovation and the company is committed to providing players with the largest collection of unique casino-style games in the social casino landscape.

Knockout Tournaments will encapsulate the whole KamaGames’ experience and skill for creating these engaging variations and the company is confident that this move will further grow their already substantial player-base.

Employing over 250 staff, KamaGames has its corporate headquarters in Dublin, Ireland as well as offices in London.

KamaGames’ flagship title Pokerist has been localised into 28 languages, was the #1 grossing app in 101 countries on the App Store and one of the top 5 grossing apps in 45 countries on Google Play.