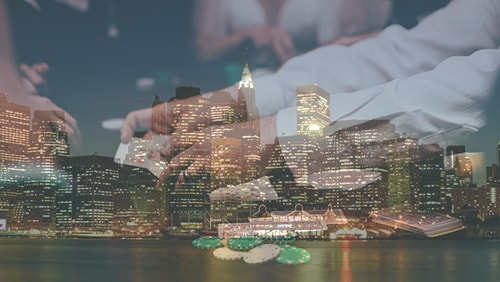 If New York Governor Andrew Cuomo has a plan to allow the state’s commercial casinos and other businesses to get back to work, he’s not sharing it with anyone. The state could soon set a record for the longest coronavirus-induced shutdown, despite the fact that most reports put the level of contagion at less than 1%. Casino employees have already become frustrated over the continued delays and rallied at the state capitol to voice their opinion earlier this month. Without much coming out of the governor’s office, they’ve been back at it this week, and Cuomo says he’s trying to come up with a solution.

The ongoing closure not only impacts casinos, inarguably one of the biggest moneymakers for the state, but also movie theaters, indoor dining (restaurants can set up tables outside, as long as weather permits) and more. Cuomo calls the current situation “fluid” and told reporters yesterday that the government would “make determinations at the appropriate time.” He added that he currently “calibrating” the schedule for when the businesses that are still shut down or running under odd protocols can return to normal.

Fitness centers and gyms, as well as certain other public facilities, are now back in business. There’s something to be said about being able to work out during high-stress periods, but there’s also something to be said about spreading the state’s wallet too thin, and New York is reaching that point. Not only is the continued shutdown taking funds away from vital education programs, but it is also adding to the state’s gaping budget hole, which already sits at more than $14.5 billion. Cuomo argues that casinos aren’t “essential” businesses, but the thousands of employees who work at the properties would disagree.

Cuomo has an agenda, but he’s not sharing it. In the meantime, despite the continued low reports of COVID-19, he simply tells state residents “not to get complacent, particularly as we move into the fall season,” adding, “COVID-19 is still a real threat, and it’s the actions each of us take — wearing masks, socially distancing and washing our hands — that make the difference in our ability to fight this virus.”

With no clear path toward resumption of services demonstrated, some casino workers were back on the streets yesterday to try to force some type of change. The casinos are trying to be supportive, but are put in a difficult position by the closure, as well. One, Rivers Casino & Resort Schenectady, which was also a site of a rally yesterday, said after the first rally earlier this month, “While Rivers Casino & Resort Schenectady was not involved in the planning of the rally, we certainly understand and appreciate the concerns of the casino workers. We are prepared to reopen as soon as the state grants us permission. Rivers Casino has developed a comprehensive reopening plan that addresses crowd management, cleanliness and disinfection, air quality and circulation, monitoring, isolation, and social distancing to provide the safest environment possible for guests and team members.”

Even if casinos are given the green light soon, recovery won’t be easy. A long road lies ahead, and will be made longer if the winter brings a lot of inclement weather that keeps gamblers away from the venues. Hopefully, Cuomo has a long-term plan, and a hidden cash pile, so the state can weather the current storm, and any that might come.