It’s another Saturday of Fight Night action from the UFC’s Apex facility in Las Vegas this week with the card headlined by a light heavyweight bout between American Anthony Smith and Austria’s Aleksandar Rakic. The main card is scheduled to start at 9 p.m. ET. 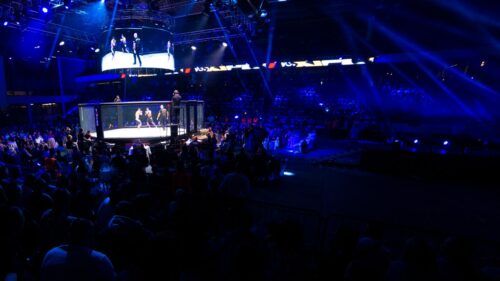 The light heavyweight division is a bit in flux right now as champion and UFC pound-for-pound king Jon Jones last week relinquished his title over a salary dispute with the organization. The UFC quickly announced that Dominick Reyes and Jan Blachowicz would meet September 26 at UFC 253 to crown the new light heavyweight king.

The 32-year-old Smith (33-15) is currently ranked No. 5 in the division – he spent most of his career as a middleweight but did fight Jones for the light heavyweight title at UFC 235 in March 2019 and showed very well in a unanimous decision loss. Smith followed that up with a fourth-round submission of Alexander Gustafsson and was most recently in the Octagon in May and lost to Glover Teixeira by fifth-round TKO (punches).

Smith fights rarely go the distance as he has only four decisions in his career (two wins, two losses). “Lionheart” wins the majority of the time by KO/TKO (55 percent) and usually loses that way (60 percent). Smith is a +215 underdog for Saturday.

Rakic (12-2), 28, lost his first professional MMA fight back in October 2011 and then won his next 12. However, he took a step up in competition in his most recent bout in December 2019 and lost to Volkan Oezdemir via split decision. “Rocket” has won nine of his 12 bouts by KO/TKO and is a -275 favorite for Saturday. Smith, for what it’s worth, beat Oezdemir by third-round submission in October 2018.

The co-main event is a welterweight bout between Americans Robbie Lawler (28-14) and Neil Magny (23-7), and they are ranked No. 13 and 14 in the division, respectively. The 38-year-old Lawler is a former welterweight champion but is nearing the end of his career with three straight loses and four in the past five – albeit against stellar competition. “Ruthless” is priced at +195.

Magny, 33, comes off a June unanimous decision win over Anthony Rocco Martin and has taken four of his past five overall, but generally has not faced the level of competition that Lawler has in his career. “The Haitian Sensation”, a -250 favorite, has won 57 percent of his fights by decision and Lawler just 25 percent via the judges.