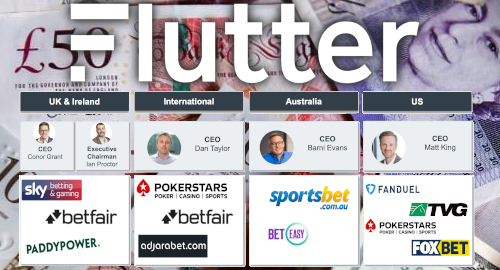 UK-listed gambling giant Flutter Entertainment saw revenue rise but profits plunge in the first half of 2020, as online casino and poker options did their best to offset sports betting slowdowns and retail closures.

Figures released Thursday show Flutter generated revenue of £1.52b in the six months ending June 30, up 49% from the same period last year. Adjusted earnings were up 59% to £342m but pre-tax profits tumbled 70% to just £24m.

The revenue and earnings figure were more modest on a pro forma basis, which pretends that all the brands Flutter added during its recent acquisition frenzy were part of the fold in H1 2019. Under those conditions, revenue rose 21% to £2.39b while earnings gained 35% to £684m.

At the group level, pro forma sports betting revenue gained 8% to £1.2b, while gaming revenue shot up 40% to £1.19b as punters looked for ways to alleviate their boredom following the pandemic-related suspension of major sports.

PPB’s results were laid low by the mid-march closure of Paddy Power’s retail network, which cut retail revenue in half to just £79m. PPB Online fared better, falling only 8% to £461m as an 18% rise in gaming offset a 21% decline in online betting (with the Betfair exchange taking a particularly tough hit). PPB’s online gaming brands reported average daily active customers up 37%.

Flutter, which in April declined UK government financial support for furloughed retail staff, claims to be committed to its 620 shops across the UK & Ireland, given that there are still plenty of ‘hybrid’ customers in those markets who patronize both retail and online options.

The UK-facing Sky Betting & Gaming (SBG) unit reported revenue up nearly one-third to £439m and earnings up two-thirds to £184m. Betting revenue rose 36% to £253m despite a 30% decline in stakes, as betting margins doubled year-on-year to 14.8%.

Flutter said this margin boost was “likely a temporary phenomenon” due to pandemic punters being forced to wager on unfamiliar sports like ping pong. Meanwhile, SBG’s gaming ops benefited from average daily actives spiking 59%, with the Sky Vegas app topping all UK rivals in H1 downloads.

The Stars Group’s revenue rose 40% to £697m while earnings rose two-thirds to £380m. Stars’ poker/casino revenue had been on a negative trend until the pandemic lockdown, but average daily customers shot up 75% in Q2, boosting H1’s gaming revenue by 43%, easily offsetting the 10% decline in the division’s tiny betting operations.

Flutter took a noticeable shot at Stars’ former management’s fondness for operating in grey/black markets such as Russia, noting that there were “a small number of TSG jurisdictions that Flutter had previously determined it would not operate in and in such cases, we have now switched these markets off.”

Flutter also stated that its brand integration review had identified the need to improve “the quality of TSG’s safer gambling/anti-money laundering procedures.” Coupled with the market exits, Flutter estimates this clipping of TSG’s wings will cost the company around £65m per year.

Flutter plans to boost TSG’s sales & marketing investment from its current 14% of revenue to something closer to the industry average of 25%. Flutter also plans to accelerate development of PokerStars’ technology due to consumers in “a number of jurisdictions” believing Stars’ product “lags behind competitors.”

Australia was one of the few jurisdictions not to halt racing operations during the pandemic, but it did shut retail betting operations. As a result, the Sportsbet and BetEasy online betting brands reported revenue up 45% to £435m, while earnings soared 84% to £121m.

Daily active racing customers were up 30% in H1, while stakes grew 18% and punter-poor results pushed margins up 2.2 points to 11.7%. That latter stat also benefited from “the addition of some traditional retail customers who tend to bet on higher margin racing products.”

Flutter claims its US operations held a 31% share of the overall market in H1, with FanDuel’s online sportsbook now boasting over half a million customers across six states.

Flutter CEO Peter Jackson said the H1 results “exceeded expectations as we benefited from geographic and product diversification.” The market shrugged, as Flutter shares closed Thursday down less than 1%.

Jackson noted that the pandemic was “a highly unusual backdrop” for the completion of its TSG integration but Flutter plans further rejigging of its federal strategy. The company has appointed four ‘regional CEOs’ to oversee the following operations: UK & Ireland (SBG, PPB), International (PokerStars, Adjarabet, Betfair International, B2B), Australia and the US.

Flutter’s decision appears to be a harsh judgment of TSG’s much-touted but never-realized plans to develop a single betting platform for its various brands following its acquisition of SBG in 2018.

With the qualifier that we’re living in uncertain times, Flutter said H2 is off to a good start following the resumption of major sports, bookie-friendly results and the “ongoing resilience” of gaming options.