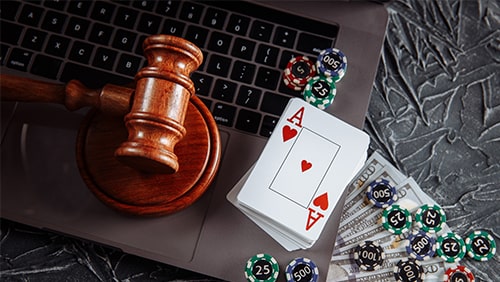 The U.S. District Court in Nevada has granted Mike Postle’s motion to dismiss a quarter-million case against him as popular poker player and YouTuber Marle Cordeiro’s accusation was thrown out of court.

Four months ago, Cordeiro went after Postle for a humungous $250,000 in punitive damages and pushed for a trial by jury. There was one key problem, and that was although the case was filed in the home of poker, Las Vegas, Nevada, the game itself took place at Stones Gambling Hall… which is in California.

Around the world, many poker players raised concerns that players on ‘Stones Live’ had been the victims of an elaborate scheme to cheat during the live-streamed games and con players out of their hard-earned via a delayed live stream of the action being funnelled to Postle’s mobile phone or even a ‘bone-conducting microphone’ that was hidden under the baseball cap Postle chose to wear.

Joey Ingram was chief among the accusers despite not sitting in the game and many plaintiffs were signed to Mac Verstandig, lawyer at large who issued this statement to PokerNews about Cordeiro’s case being dropped.

“The U.S. District Court for the District of Nevada found Mr. Postle lacks sufficient contacts with the State of Nevada to be sued there, and accordingly dismissed the case. I have immense respect for the court as well as the judge who issued the ruling; it is well-written and well-reasoned. Importantly, however, the order does not speak to the merits of the case. Mr. Postle has now amassed a laudable track record of avoiding substantive legal inquiries into the sum and substance of his actions; it seems supremely unfortunate he has taken this path and not, instead, seized on one of these opportunities to clear his good name. Ms. Cordeiro and I are still reviewing the order and assessing various options.”

Even the judge rules that ‘The case was dismissed due to the fact it was filed in Nevada while the poker games in question took place in California.’. So what does that mean? Can Cordeiro, Verstandig et al simply move the goalposts and roll the dice?

The idea that any player saw the action, was “lured into playing” then was defrauded is a tough one to get around for judges. Poker players are known to be tactically astute, and opportunistic by their very nature – it’s a part of how good players such as Cordeiro win at the game. Could the idea that Postle was then beatable be something that many players felt and therefore hard to pin as Postle luring those players to their demise.

‘This court finds that plaintiff’s allegations are insufficient to plausibly give rise to jurisdiction, given the total absence of evidence to support these allegations and defendant’s denial. Accordingly, jurisdictional discovery is not appropriate.’ Said the court in regard to presented details about Postle’s travel to and from Nevada for personal matters relating to him seeing his child.

Whether it would be, in the words of Postle ‘burdensome’ or not to conduct his fight against the allegations in Nevada or not, surely at some point, these claims should be investigated fully, or settled by way of admittance from Postle.

‘The reality is that Marle is attempting to drag Michael to court in Nevada based on the alleged actions of Stones’, as Postle’s team put it throws more luring accusations into the mix unnecessarily. A court clearly needs to look at footage, in the manner that Ingram did, and decide for themselves whether Postle is a cheat or not. The many plaintiffs still awaiting a conclusion to the accusation, including Cordeiro, will be hoping that happens very soon.

While Postle is unlikely to sit down at a poker table any time soon, for many reasons, it still feels like this bizarrely compelling narrative is yet to reach the eagerly-awaited denouement it deserves. If Postle cheated, as the 89 plaintiffs accuse, then sooner or later, it seems like he will be found out.