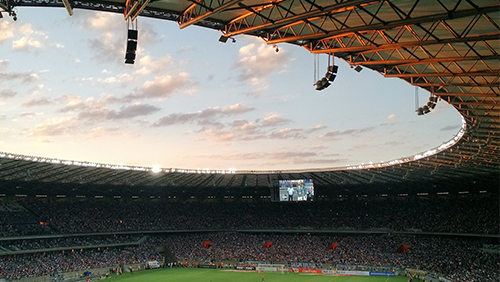 Tense, tight and terrifically entertaining, the quarter-finals of the Europa League saw four great matches produce four teams who will battle in the semi-finals of the competition.

The first matches to take place involved the 2017 winners and a side they may yet meet in the final, while the second round of games saw a classic battle for power between Wolves and Sevilla.

Let’s take a look at all four games.

It took 95 minutes for the breakthrough in sweltering heat of a Cologne evening, but Manchester United finally put F.C. Copenhagen to bed in extra time as the Red Devils made it to their third semifinal of the 2019/20 season.

The one-off tie has replaced the two-legged ties that by now would be a fairly distant memory in this longest football season in history. That takes a big edge off the big teams in the Europa League and Champions League, with less time to exert their superiority, but Manchester United were able to see off their spirited Danish opponents last night in the German city of Cologne.

Largely dominant over the course of the game, especially in the second half and extra time itself, United twice had goals ruled out for being offside via VAR. They eventually scored via a stonewall penalty, their 21st spot kick of the season converted ruthlessly by Bruno Fernandes for the Portuguese’s latest stirring contribution to a match he slowly grew more and more controlling of.

Copenhagen were unlucky that their defensive resolve couldn’t get them to penalties, in particular the efforts of Karl-Johan Johnsson, whose 13 saves constituted the joint record by a goalkeeper in a single Europa League game since the 2009-10 season saw it changed from the UEFA Cup.

All the goals were scored in the first half as Inter reached their first semi-final since their triumphant run to winning the UEFA Champions League in the 2010/11 season. It was Romelu Lukaku who made the headlines as he scored a record 9th game in succession in the competition, taking him clear of another former Premier League legend in Alan Shearer in that respect.

🇧🇪 Lukaku has scored in his last 9 UEL games – netting 12 goals in the process 🔥🔥🔥#UEL pic.twitter.com/1oXOhJCpM6

A tense, tight affair between two evenly-matched sides was eventually decided by a late Sevilla winner as Lucas Ocampos nodded in a late, late winner in the 88th minute to break Black Country hearts.

The first half saw one of the only major talking points of the 90 minutes take place, as Adam Traore’s thrilling run into the penalty box ended in a spot-kick being awarded to the 7th-placed English Premier League side. Raul Jimenez, normally so deadly from the spot, missed his kick, however, and saw his tame shot saved near the centre of the goal.

The second half saw Sevilla grasp a little more control, and with two minutes to go, a cross from Ever Banega was nodded in to break Wolves hearts and set up a semi-final between Sevilla, who have won the Europa League in three of the last six seasons and Manchester United, who ended Sevilla’s winning run in the 2016/17 season.

A comprehensive victory for Shakhtar Donetsk saw the Ukrainian side march into a semi-final against Inter Milan in fine form. On the evidence of this game, Inter will have a job on their hands. With goals from Moraes, Taison, Lourenco and Cordeiro Dos Santos, Basel never got close to their opponents and were dominated throughout, scoring an injury-time consolation through former Norwich City striker Ricky van Wolfswinkel only.

With four big clubs in Manchester United, Inter Milan, Shakhtar Donetsk and Sevilla competing for the second biggest European trophy of the season, there’s still an awful lot of action remaining in the 2019/20 Europa League, with three games to decide the eventual destination of the trophy.