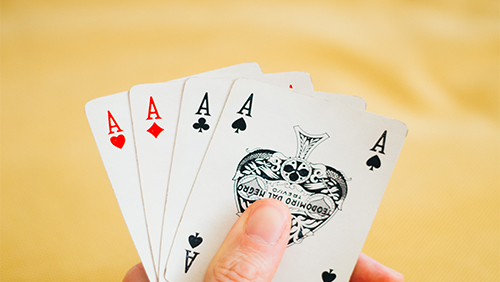 We’ve all been in that poker moment of needing to find a miraculous card on the river to preserve our tournament lives. It almost never happens, of course, and if it’s a two-outer (one of only two cards can turn the hand around and give you the winning hand), it’s easy to go into a very odd zone of visualising those cards.

That’s the situation the subject of this week’s classic World Series of Poker hand, Bryan Piccoli, found himself in three years ago in 2017. All-in with pocket eights against the ace-rag of Frenchman Antoine Saout, Piccoli knows that he is a favourite to double-up and bump his stack to almost 18 million chips with 12 people remaining in the World Series of Poker Main Event.

Poker being poker, however, Piccoli immediately falls behind Saout on the flop, where not one but two aces give Saout trips to Piccoli’s two-pair.

The expression on Antoine Saout’s face at this stage is either extremely narrative-driven or proof in the existence of a higher power, those oft-mentioned but never seen ‘Poker Gods’. As an aside, it’s surely one of the game’s most redeeming charms that while many religious types visualise a single, all-seeing Deity, poker players identify with a group of Gods, presumably sitting around playing cards. There’s a magic to that.

Anyway, back to Saout and his expression that could curdle milk at 40 paces. It’s not that he looks smug. It’s that he looks so cruelly pleased to have overtaken Piccoli that if he were a baddie in a Hollywood movie, he’d have to have a pencil moustache and be forced to wear a black hat at this stage.

Piccoli is stoic in his seat after the blank turn of a queen and clearly isn’t expecting an eight to fall on the river. He’s 5% to win the hand (a 1 in 20 chance) but there it comes on the river, and up shoots Piccoli out of his chair, jumping around, ripped through with emotion, charging at his rail for an embrace. Piccoli brays ‘Let’s go!’ as he returns to his seat, raw emotion all over his ace.

The eliminations that followed would see both men reach the final table, but as it happened, neither man got close to the top prize of $8.15 million, won by Scott Blumstein. Bryan Piccoli finished in 6th place, and, gaining a modicum of revenge, Antoine Saout lasted one place further, cashing for $2 million, compared to the $1.67m Piccoli took home.

For Piccoli, that equated to his best-ever career live cash, and still counts for a third of his total lifetime earnings. For Saout, however, it doesn’t even constitute his best cash in the WSOP Main Event, his run to 3rd place in the 2009 Main earning him just under $3.5 million.

You don’t feel sorry for either man, now do you?