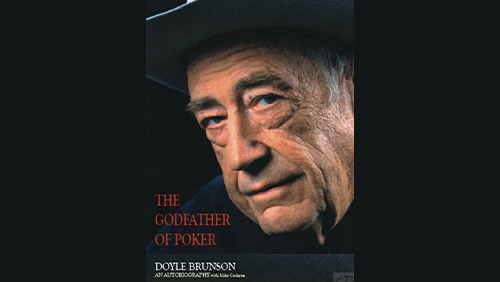 There are many poker biographies available, and to some students of the game, those who have succeeded in the most recent era are most useful for those aspiring to greatness. However, in this week’s Poker in Print, we focus on an autobiography written by perhaps the most iconic poker player who has ever sat down to play the game we all love.

The Godfather of Poker is the story of Doyle Brunson, also known as ‘Texas Dolly’, who famously won two World Series of Poker Main Events in back-to-back years with the final hand of 10-2.

Brunson, who retired from tournament poker in 2018 after 50 years at the felt, covers mostly his early years in this fascinating book which harks back to a long-gone era of cowboy hats, pistols at dusk and playing poker for a living when even taking a seat in some games was to endanger your life.

Brunson’s autobiography (the book is co-written with Mike Cochran) covers everything you can imagine and plenty more. As Nolan Dalla calls him in the book, “Brunson is the Babe Ruth of poker”, and it’s easy to see the similarities. Brunson may have become the Godfather of poker as it is today, having been born 87 years ago in 1933, a full six years before the second World War, but he was a young man once and this book revisits that era.

From gunfights to mobsters, stabbings to a recovery from cancer, Brunson is a survivor. Not just an everyman, but a journeyman who has rattled along in life and poker like they were two tracks straddled by his own steam train, which, slow and steady, has continued on its path all these years.

Doyle Brunson may have gambled for his life – literally with a gun held to his head as you’ll discover in the book, but he’s also gambled for millions of dollars and proved himself beyond the rigours of poker eras that have come, gone and come again.

Brunson’s life-story actually makes you forget about the minutae of the game and that’s no bad thing. Hie life is filled with huge, chapter-marking moments such as his leg break which ended what was a promising career as a basketball player and the death of his daughter.

You can buy Doyle Brunson’s autobiography The Godfather of Poker right here, right now in ebook form. Just £7.55 at its current price, it’s a fast and fascinating read through the man who oversaw so much of the modern poker era build around the tables he played at.