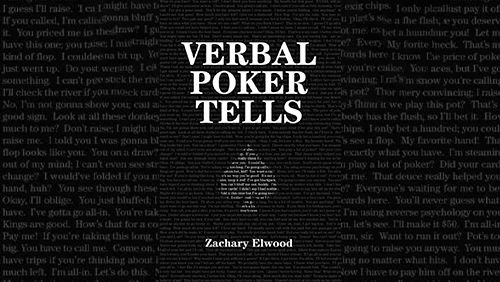 It’s hard to make a successful follow-up to a much-loved original. Think of Dumb & Dumber, the Matrix or Dude, Where’s My Car? Each are untouchable, very difficult to even dream of improving (well, maybe not that last one). The point is, making a sequel is hard. In terms of poker books, it’s damn-near impossible.

We can think of very few poker books that have achieved this lofty ambition, and in the last year, we could count the number of books to improve on the original on the fingers of one finger – Dara O’Kearney and Barry Carter’s popular strategy book PKO Poker Strategy being just as good as the original that came before it.

So, for that reason, reading Verbal Poker Tells wasn’t exactly a prospect we looked forward to, and not because of the subject matter. It was merely because Zachary Elwood’s original, the highly popular Reading Poker Tells was so good. It’s like watching the first episode of a new boxset when two of the writers left in the hiatus; you’re scared to find out if the magic is gone.

Verbal Poker Tells lives up the magic of its predecessor.

Player talk at the table feels like such a wide subject, it could easily have been covered before the original book and in some ways, manages to dodge the comparison to the original tome purely by being hard to place as either a prequel or a sequel. If you can’t say for sure in which order the two concepts for the books actually sit, you can’t feel the need to compare them in the first place – Elwood is a very smart cookie.

While Reading Poker Tells goes for the body language, the patterns of bet-sizing, of quirks, tics and tells, Verbal Poker Tells focuses – as you might expect – on what poker players say. Poker players in general have a huge amount to say, and often at the table. In many ways, it’s difficult to fathom why. As Daniel Negreanu says in that advert you’ve seen 50,000 times before you watch any poker hand ever on YouTube, everything you do at the table conveys information.

Verbal Poker Tells doesn’t so much shine a light on table talk as strap a bone-conducting microphone to your ear and bug every sort of opponent you could face.

It’s a brilliant book, making use of Elwood’s experience but breaking it down into player types, allowing you to take away a lot of information in ways that allow you exploit others who are sitting in your next home game/quarantined Zoom session/plastic-partitioned Vegas cash game.

As a poker newbie, it can often be easier to say nothing and listen, but while many players then get more confident and start talking, as Elwood explains, this can be counterproductive.

The book breaks down ways that you can tell what someone is saying as either the truth or a lie. From misdirection to defensive or aggressive statements and how to translate certain phrases, there are a huge number of tips inside the book to start deciphering your enemies as soon as they open their mouths.

From gathering information about that person’s holding in the hand you’re playing against them to understanding general patterns and manipulation of other, Verbal Poker Tells is one of the best books we’ve ever read on one of our favourite parts of the live game.

Sure, for now playing live poker is tricky. You may have to wait to put some of these tips to use, especially as a large percentage of any words you’ll hear at a poker table right now come from behind a face mask or a plastic separator. But there will be a time where live poker returns and the smart will inherit the big pots. The player who has this book in their armoury, ahem… collection, will be stronger for it.

You can buy the book digitally right here, right now. You can make all the excuses in the world not to do so, but you’ll be wrong and we’ll know why you’re saying it, too. After all, we’ve read Verbal Poker Tells.