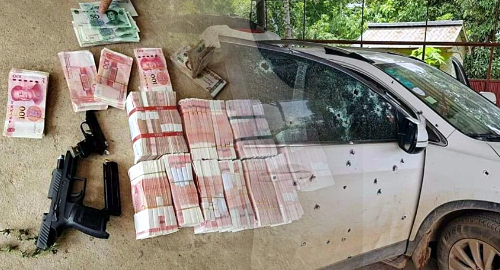 A notorious casino in Laos is at the center of a police investigation into a shootout that resulted in the deaths of four Chinese nationals.

Earlier this month, Lao police reported being called to the Kings Romans Casino in the Golden Triangle Special Economic Zone near the intersecting borders of Thailand and Myanmar. According to some accounts, the call came after three Chinese nationals entered the casino with a suitcase containing around RMB1m (US$143k) in cash.

According to some reports, the Chinese nationals brought the cash to make good on a gambling debt but some kind of argument ensued, resulting in their decision to flee with the cash, with other Chinese nationals in hot pursuit. A shootout occurred in which the three Chinese who fled the casino were killed by their pursuing countrymen, one of whom was subsequently shot and killed by police.

However, other reports claim that four Chinese nationals were killed and a fifth wounded in a rented house near the casino in an apparent robbery. The alleged robbers, a Chinese man and his wife, then fled the scene with stolen cash only to be cornered by police the following day, resulting in a shootout and the arrest of the wounded husband, while the wife reportedly escaped.

Whatever the truth, it’s par for the course for the Kings Romans venue, which last year was the site of a daring robbery in which a gang of robbers dressed as Chinese police relieved the property of around RMB3m.

Kings Romans is owned by Chinese national Zhao Wei, who US officials have accused of being the head of a ‘transnational criminal organization’ involved in trafficking everything from drugs to endangered wildlife to human beings. Zhao has dismissed the allegations as “malicious rumor-mongering.”

Like most casinos around the world, Kings Romans was shut down earlier this year to minimize COVID-19 transmission. The property was only just cleared to reopen several days before the shootings of the Chinese nationals.