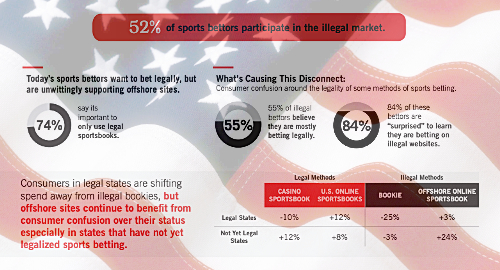 A new survey of 3,451 US adults released Tuesday by the American Gaming Association (AGA) claims that US sports bettors boosted their spending with locally-licensed online sports betting operators by 12% in 2019, while spending with ‘illegal bookies’ fell by one-quarter in states that have legalized wagering.

The AGA didn’t define the parameters of what counts as an ‘illegal bookie’ but it’s apparently limited to guys named Lefty who hang out at the back of the bar and are willing take your action on credit. Because the AGA also said that internationally licensed online sportsbooks saw spending rise 3% in those same legal betting states last year (and +24% in states that have yet to legalize).

The AGA’s data appears to show that bettors are largely civic-minded but a bit slow on the uptake. Nearly three-quarters (74%) of respondents stressed the importance of only betting via legal bookmakers yet more than half (52%) of those who wagered in 2019 did so with operators not carrying the local seal of approval.

This discrepancy apparently comes from ignorance (willful or otherwise) regarding what sites have been cleared to operate by local authorities. Over half (55%) of those who bet with an unauthorized operator reportedly claimed they were betting legally. (Technically speaking, they were, since US laws prohibit the taking of a bet without a local license, not the placing of said bet.)

AGA CEO Bill Miller said those unsavory rapscallions who dare to offer wagers from sunnier climates “continue to take advantage of unknowing consumers.” However, less than half (48%) of the survey’s ‘illegal bettors’ said they’d amend their behavior after being informed of its illegality, possibly due to their awareness of the much higher values on offer at many international sites than can be obtained via the local options.

As for why a bettor might shift to a locally licensed option, 25% cited confidence that their winnings would be paid while 20% said they’d switch after being made aware of casino options. But only 19% cited a desire to use a locally regulated sportsbook as a motivating factor, the same number that said they’d be lured by promotional free-play options (which aren’t limited to local books).