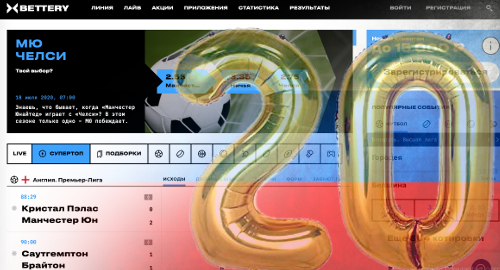 Russian sports bettors recently woke to discover Bettery, a new legal online wagering option operating via the web, as well as iOS and Android devices. Bettery is a member of the Bookmakers SRO, one of two rival ‘self-regulatory organizations,’ whose members also include Leon, Marathon, Olimp and Fonbet, Russia’s largest bookmaker.

Bettery is run under License No. 11, which was issued in 2009 to the Moscow-based Atlantic-M LLC. Corporate documents indicate that Atlantic-M is 75% owned by Malfinio Ltd, a Cyprus-based company of equally mysterious provenance.

Russian media outlet The Bell reported in April that attempts to contact Atlantic-M by its listed phone number were answered by an individual who had no clue about any bookmaking activities. The Bell also claimed that the other 25% of Bettery is collectively owned by Stanislav Magomedov, Irina Borodina and Maxim Kiryukhin, who also hold minority positions in Fonbet.

A recent Fonbet profile by the Organized Crime and Corruption Reporting Project claimed that Kiryukhin assumed majority ownership of Fonbet following a criminal case against the company for unauthorized online gambling in 2013. Kiryukhin reduced his Fonbet stake to just 9% four years later through a somewhat suspect financial arrangement with another opaque Cyprus-based firm, Birusa.

Fonbet made headlines this spring when it was included on a list of 646 Russian companies considered to make up the nation’s ‘economic backbone.’ Within days, Fonbet was removed from this list following protests by other companies and, incredibly, the company’s own general director Alexander Paramonov.

Market-wide, Russian licensed bookies reported a total of 20.9m visits in June, up from 16.5m in May and from 14.1m in April. Online traffic evaporated following this spring’s shutdown of most major sports events, including the top division of Russian football.

Fonbet is also among the Russian land-based bookmakers making a return to form. Russian affiliate Bookmaker-Ratings reported this week that several companies, including Fonbet, Liga Stavok, 1xStavka and Bingo Boom had reopened some or all of their Moscow betting shops following Mayor Sergei Sobyanin’s approval.