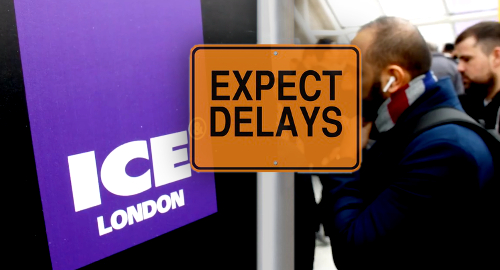 The gambling conference calendar has suffered yet another COVID-19 blow as the organizers of ICE London 2021 announced they were pushing the event back a few months.

On Wednesday, Clarion Gaming provided “advanced notice” that the ICE London 2021 event scheduled for next February 2-4 at the ExCel London Exhibition Center had been rescheduled for April 20-22 at the same venue.

Clarion’s managing director Kate Chambers said the delay followed discussions with stakeholders, who evidently expressed doubts that the world will be back to normal by next February. Clarion’s announcement came one day after the Academy of Medical Sciences claimed that a second wave of infections this winter could cause up to 120k deaths unless the UK improves its adherence to health and safety guidelines.

Chambers said there would likely be “more bumps in the road” ahead but vowed to “navigate those challenges and deliver events that all sectors of the international industry want and need.”

This definitely isn’t the best time to be in the business of assembling large groups of individuals in confined spaces. In March, Clarion was forced to postpone its ICE North America confab, which was scheduled for mid-May in New Orleans but will now (hopefully) happen sometime next spring.

The North America event was supplanted by a virtual event this May, ICE North America Digital, which attracted over 2,300 active participants. ICE held its second online event in June following the cancellation of its ICE Asia get-together in the Philippines.

Clarion is hardly the only organizer whose plans have been upended by COVID-19. Last week, the organizers of the Global Gaming Expo (G2E) Las Vegas 2020 conference announced that the event was officially cancelled due to “global travel restrictions and currently unknown guidance on large public gatherings.”

As always, our thoughts turn to the fate of our roving reporter Becky Liggero Fontana, whose conference dance card is looking more barren with each passing week. So if you’re out dog-walking and you find yourself accosted by a wild-eyed woman waving a microphone and seeking your input on Pennsylvania’s online slots tax rate, remember to maintain eye contact and speak in a soothing monotone while backing away slowly, then pick up Fido and run like hell.