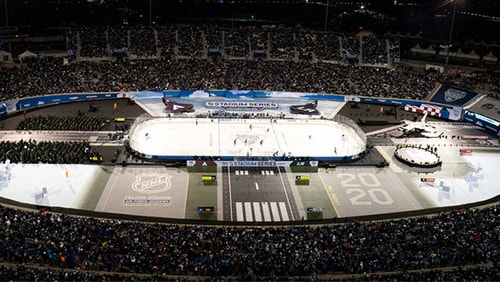 Virtually all sports leagues in the U.S., provided they see players suit up, are going to hold competitions on courts, fields and rinks in front of empty stands. The coronavirus is forcing organizations like the NFL, NHL and NBA, in accordance with state and federal directives, to keep fans away until there is more confidence that the pandemic is under control, which creates a unique situation for the leagues. Part of the thrill athletes experience in the games is the crowd noise, as fans cheer, holler, root and sometimes rant. Different leagues have formulated plans on how to address the lack of live fan participation and, in some cases, piped-in audio clips or soundtracks from video games are being used. The NHL is taking a different approach, and wants to hear from hockey fans.

NHL team season-ticket holders are beginning to receive correspondence from the teams, asking them to get involved. They, instead of all fans, were probably chosen because of the easy access to databases, and will have the ability to record and submit 30-second video and sound bites that could be included in the league’s upcoming games – more colorful commentary probably won’t pass muster.

The NHL will be holding the final matches of the 2019-20 season in Toronto and Edmonton. The fan-provided sounds will be heard live by players at the rinks, as well as used in game broadcasts and on NHL social media accounts. The league explained that submissions need to be free of any possible copyright or trademark issues and told the recipients to avoid “the appearance of paintings, posters, professional photography or any other art in the background,” as well as to avoid “wearing apparel that shows any brands.”

The material submitted should include expected reactions to goals being scored and can be specific for each team. For example, Boston Bruins fans can provide a clip of the famous “TUUUUUUUUKKKKKKK” chant, which is heard every time goalie Tuukka Rask successfully protects the net. Chicago Blackhawks fans can provide clips of a “slow clap” and “30 seconds of how you act/cheer during the National Anthem at a home game.” Fans of the Winnipeg Jets were requested to provide clips on why they’re proud to support the team and to include a “We Are Winnipeg” shoutout.

The NHL is ready to bring the season to a close and find a Stanley Cup winner after owners and players reached an agreement last Friday. There was discussion on how to make changes to the standing collective bargaining agreement, and a successful conclusion to those negotiations now allows the league to get back on the ice as of August 1. There will be 24 teams participating in a modified finals tournament, with the top four seeds in each conference facing off in a round-robin format and the remaining eight teams playing in a five-game qualification series.