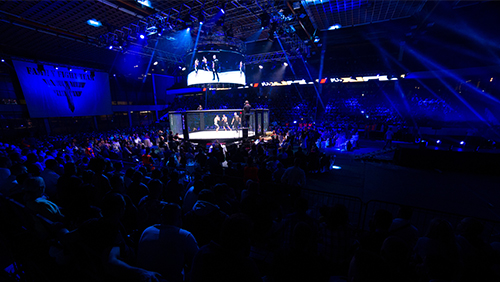 The word “best” is used way too often in sports, and it might not be accurate to say this Saturday’s UFC 251 fight card is the best in the organization’s history. It’s definitely the most unique, however, as it’s the debut card at Fight Island – otherwise known as Yas Island in Abu Dhabi, United Arab Emirates. The main card will begin at 10 p.m. ET time despite the fact that Abu Dhabi is eight hours ahead of Eastern time.

UFC president Dana White created/built Fight Island because of travel restrictions of international competitors to the United States during the coronavirus pandemic, but it actually will be the fourth time Yas Island hosts a UFC card.

The main event was to feature welterweight champion Kamaru Usman (16-1) defending his title against top-ranked contender Gilbert Burns (19-3), but Burns had to pull out after testing positive for COVID-19. He has been replaced by third-ranked and fan-favorite Jorge Masvidal (35-13), whose coach Mike Brown will not be in his corner after testing positive this week for the coronavirus.

The 33-year-old Usman, nicknamed “the Nigerian Nightmare,” is a -265 favorite (opened at -240 vs. Burns). He is on a 15-fight winning streak, only losing to Jose Caceres in May 2013 in the Championship Fighting Alliance. Usman won the welterweight belt over Tyron Woodley at UFC 235 and has defended it once, beating Colby Covington by fifth-round TKO in December.

Masvidal, a 35-year-old from Miami, has won three in a row. “Gamebred” was around a -170 favorite in November against Nate Diaz and beat him by third-round TKO (doctor stoppage). Masvidal, who is +205 for this bout, had been in a bit of a tiff with White and the UFC but got a new contract ahead of this fight. He certainly had the leverage.

The co-main event is a rematch from the featherweight division as champion Alexander Volkanovski (21-1) takes on Max Holloway (21-5). The 31-year-old Aussie Volkanovski is on an 18-bout winning streak. “The Great” was a +150 underdog when he took the belt from Holloway with a unanimous decision victory at UFC 245 in December. Some odd scoring by the judges there as two had Volkanovski winning 48-47 and one 50-45. He is -230 for Saturday.

Holloway, a 28-year-old American, hadn’t lost a featherweight bout since August 2013 against Conor McGregor before that Volkanovski defeat. “Blessed” did try to become a two-division champion by facing Dustin Poirier at lightweight in April 2019 but lost by unanimous decision. Holloway is priced +180 for this fight.

Finally, the bantamweight title is vacant with the retirement of champion Henry Cejudo, so Russia’s Petr Yan (14-1) and Brazilian legend and former champion Jose Aldo (28-6) will meet for that belt. Yan is -225 with Aldo at +175. Aldo is trending the wrong way with back-to-back losses and five defeats in his past eight, albeit all against world-class competition like Holloway and Volkanovski.