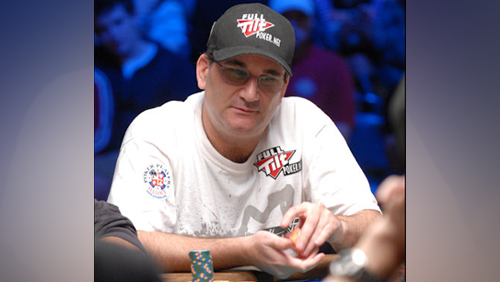 He’s not renowned for maintaining either his mood or a discreet distance from drama, but even for Mike ‘The Mouth’ Matusow, the last week has been a rollercoaster one.

You might think that an online WSOP would be something that might restrict the usually flippant Matusow, often seen roaring up the halls of the Rio in his motorized cart in recent years at the World Series in Las Vegas. Due to the global pandemic, ‘The Mouth’ has been reduced to staying in for the most part and using his podcast The Mouthpiece to sound off about the world.

That was until last night, when a beat in the latest World Series of Poker online saw Matusow go on a crazy rant after being slowrolled in his eyes.

Matusow, clearly angered by having to wait for the winning hand to be revealed by the poker player Megan Milly, known as the Poker Hippie on Twitter tweeted the worst four-letter word you can think of in calling out the slowroll.

Event 4 of the online WSOP had seen Matusow attract yet more viewers, racking up over 7,000 views and 9,000 subscribers already on his channel. It’s easy to see how he gets hold of them, with events such as this WSOP Online action on view.

Interestingly, Matusow has real form for being slowrolled and it’s clearly a huge leak in his game. He really doesn’t like it and reacts to it every time. This is a great example of how Matusow flips his lid and has invited the slowroll behaviour before.

Afterwards, perhaps the ‘morning after the rant before’, Matusow told the alleged slowroller – who told Matusow that it wasn’t deliberate but that ‘it might be next time’ – the following on Twitter:

“I’m sorry for saying that I tried to take it down and couldn’t find it best of luck. Sincerely apologize got caught up in [the] moment.”

Matusow is clearly going to be slowrolled the next 170 times he’s behind in a pot this WSOP online. How he reacted caused a real stir on Twitter, with many calling him out for the foul and abusive language he’s used. With few people in his corner for the rant, Matusow was forced to apologise, but his increasingly erratic behaviour will worry his rivals and friends in the industry alike. How he reacts next time it happens may shape the direction his subscribers head in.

The COVID-19 lockdown has affected everyone in different ways, some of us in a manner that can only be picked up on by close friends or family. In fact, it moved us so much that we put together a guide to beat the blues while playing any eSports during lockdown as well as a list of seven ways you can avoid annoying others during the pandemic as a poker player.

Matusow, so easily made irate, is still a player of huge popularity. How long that lasts in this online WSOP may have less to do with his performance at the table and more to do with how he conducts himself once the hand is over if his recent outburst is anything to go by.