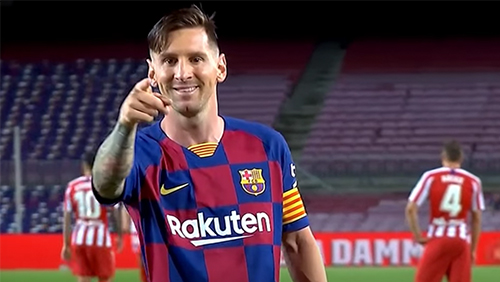 Lionel Messi has enjoyed a remarkable career. The one club man has scored 700 career goals for Barcelona and Argentina, and brought that total up last night as he scored the Catalan club’s second in a 2-2 draw against Atletico Madrid.

While that result may actually cost Barcelona the La Liga title as they sit a point behind their great rivals Real Madrid while having played a game more, what it does mean is that the unique mercurial talents of Messi are in the news all over again. But can you recall his 100th, 200th, 300th and every other centenary goal during his incredible career? No need, we’ve done so for you.

When Messi chipped in his first goal for the club aged just 17, perhaps no-one could have guessed the extent to which Barcelona, clad in blue and red, would come to rely on him. Messi, put clean through by Brazilian superstar Ronaldinho with an incredible chipped assist, fakes to smash the ball then simply follows one lobbed pass with an even better lobbed shot.

Ronaldinho, who would come to regard Messi as a little brother during his later years at the club, had passed on the baton.

Messi’s 100th career goal came on the 16th January in 2010 and was scored against Sevilla. The ball arrives at his feet in the centre of the penalty area, where he is immediately surrounded – as you might expect – by three defenders. Again, the ability to deceive is vital to the goal, as Messi fades to shoot into the roof of the net before calmly slotting the ball past Sevilla’s grounded keeper into the corner.

Messi’s 200th career goal arrived just over two years later on February 8th of 2012 and came against Valencia. Clean through on ball, Messi’s signature move of a running chip over the goalie comes as nothing of a surprise. Messi’s 300th career goal followed just 373 days later, coming against Granada on February 16th of 2013. It’s noticeable merely for the fact that it’s so scrappily un-Messi, being a right-footed follow-up that is neatly slammed into the centre of the goal.

Messi’s 400th career goal came two years later, and again, it was Valencia who would put up with the centenary celebrations coming at their expense. As if aware of how he scored the 200th goal of his career, possibly hoping to create the perfect spitting image finish, Messi goes for the running chip from another one-on-one situation. The goalkeeper, however, is not fooled. Not for him the mocking glare of history years later, oh no. He gets a palm to the ball and… drops it right onto Messi’s left wand, which is used to slot the ball home. Ah.

Messi’s 500th career goal will be the centenary goal that you definitely remember, as it came in the dying seconds of an El Clasico to remember. Two minutes into injury time, having already notched his 499th goal, Messi gleefully accepted a cutback from Jordi Alba to slam home the winner in a five-goal thriller. This time, the shirt came off, held up to the adoring Camp Nou crowd by the man himself.

Messi’s 600th career goal came against Liverpool in May 2019, as his top corner free-kick against the Merseysiders saw the Catalans on their way to a 3-0 home victory in the Champions League semi-final. If he thought that it had sealed the Catalonian club’s safe passage into final, however, he was dead wrong; Liverpool won the second leg 4-0 at Anfield to leave one of the best goals of Messi’s career almost meaningless apart from being enjoyed in isolation. On its own merit, the free-kick is sublime, rising all the time from the moment it leaves his left foot before soaring into the top corner past a dumbfounded

Messi’s 700th career goal came just last night, a Panenka penalty scored with such effortless ease, it was cruel on the goalkeeper and everyone who knows him. It was almost a mercy that no fans were there to witness it. They almost certainly will be in two or three years’ time to see Messi’s 800th goal. While the Argentinian genius remains 26 goals behind his great rival, Cristiano Ronaldo, he is over two years younger than his Portuguese adversary.

Watching the drama play out between the two men will be something to treasure in the twilight years of their careers. Here are the centenary moments of Lionel Messi’s football stardom.