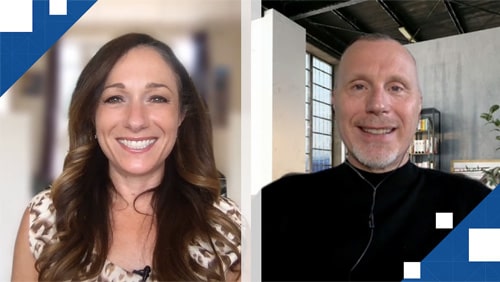 The gambling industry has started to figure out how its going to use this current moment to adapt and improve long term, and a lot of that involves new technology and new ways of thinking. The perfect man to talk to then is Earle G. Hall, CEO of AXES.ai and chair of the GSA blockchain group, as he can pull from a deep knowledge of technology and human behavior and help us through it. He joined our Becky Liggero Fontana for the latest episode of The Long Con.

Liggero Fontana began by asking how Hall has adapted to a more sedentary life, having months of rest from his usual busy travel schedule. “I’m really worried about my first plane ride to see how my body’s going to react, my morale is going to act,” he responded. “But more than that there’s something that I’m researching right now and it’s the amount of chemicals they’re putting in the plane. I’m sure after a couple plane rides it’s like everything else, I’ll be back in the air I’ll have about a hundred thousand miles left to do between now and Christmas, no big deal, back to the races. But for all of us that are road warriors, our lungs are already pretty dried out and roughed up from all the miles we’re doing in the hotel rooms, and the chemicals on the carpets and stuff. So from what I’m seeing about the way they’re disinfecting the airplanes, I’m stressed about that one and I’m going to monitoring it very closely from airline to airline.”

But before we can get back to the conference circuit, the gambling industry has to secure its future. Hall gave a peak of what that might look like. “I think before everybody’s revenue comes back to somewhere near normal, we’re going to be in a hybrid world where we’re going to be using virtual a lot more than in-person,” he said. “And it’s not going to be because of social distancing, because I think that’s just a load of crap… but I think we’re going to be in a hybrid world that’s going to be generated by economics. Everybody’s anxious to get open, everybody’s anxious to get moving, but at the end of the day companies can’t go bankrupt because of travel allowances. So I think everybody’s going to be very careful until we get back into some level of normality, and right now normality is going to be governed by social distancing. We have jurisdictions that need to have two empty slot machines between one player; so either you’re going to be playing a hundred slot machines in the warehouse, or you’re going to have less than 50% of your casino floor being in an operation. And if you do the math on that I don’t know how people are going to be profitable on low volume and low play.”

A big change that appears to be quickly coming to land based gaming is cashless play. Hall talked about how many years of development have already gone into this seemingly new trend. “Cashless was always king in Mexico, South Africa, Poland, and places where they had the courage to go 100% cashless,” he said. “In the next 6-12 months, you’re going to see contactless pickup very fast, in other words pushing people to their phones, away from smart cards and stuff like that. As soon as you’re in your phone, you’re already in a digital world. So going from a fiat currency, cash in into a cage, into a digital wallet, the adoption phase of that is going to be a lot faster than most people think. Cashless has taken 10 years to catch on, I know because I’ve been building cashless for ten years. Contactless is going to be a fraction of that time, just because of the fact that the jump out of a card and into your phone is going to be a very simple, fast thing to do because people already have loyalty and rewards for coffee companies, airlines and everything else.”

A big step towards cashless involves digital currencies, like Bitcoin SV, and Hall noted that blockchain technology is a totally necessary element of this change. “Digital currency, to be integral needs blockchain for the very simple reason is that if you have digital currency coming from what’s called a single source supplier, you can’t really move it around in the same way you could on a on a digital currency, like on a bank system or anything like that,” he said. “So blockchain right now is going where it should be going in the invisible side of technology. We’re away from the Bitcoin phase, we’re starting to move away from distributed ledger technology, and we’re going into what blockchain really is: It’s linking transactions together with integrity so that you can’t break them apart or hack into them. And what’s really missing in the digital world is that linking piece, and really the definition of blockchain is to be able to link with random generated passwords so that transactions are linked together, so that if you try to hack into one you’ve got to hack into the whole chain.”

And if you’ve seen Hall at conferences in the past year, you’ve seen him talk about the growing importance of Artificial Intelligence. “So I’ve gotten burned at the stake three times for this one, which means I might be right if I look at all the people have been burned to the stake before me, like Joan of Arc and the rest,” he said. “First of all, artificial intelligence, if I was going to draw a triangle, it’s on the top artificial intelligence is the holy grail of performance in a casino. It means the only resources are using in marketing, the only resources you’re using in operations, the only resources you’re using in maintenance, are all geared towards predicting what’s going to be good or bad for us tomorrow, instead of waking up tomorrow and trying to fix yesterday.”

Before any of that really steps into high gear though, we have to solve the current health crisis. And Hall warned that we have long term problems to fix in that department. “My opinion is going to be, with all due respect to those people who have lost a family member, and I don’t want to disrespect anybody with Covid, but Covid is just another bleep on the radar,” he said. “We have long-term health issues, the biggest one is diabetes. So we have a whole bunch of health issues that are out there, and while Covid has been a little a disaster for some sub segments of the population, once we come out of Covid, the big gift of this is that we’ve lived in a confined space, we’ve absolutely destroyed our waste lines. We’ve absolutely gone to the extreme of everything we can do in personal health, and it’s affected our personal mental health. So the really exciting thing about the next 12 to 18 months is you’re going to see a major wave towards personal health, and that’s probably going to be the underlying hidden gift out of this, is that you have to make a choice. Either am I going to go downhill and die of high blood pressure, or am I going to take myself seriously and I’m going to make changes in my life.”

Watch the entire video to see Liggero Fontana and Hall discuss big data and blockchain more, but also discuss the balance between centralization and buying local, and how the balance between happiness and fear will affect us coming out of this crisis. And don’t miss any of the great videos we have coming on our CalvinAyre.com YouTube channel.