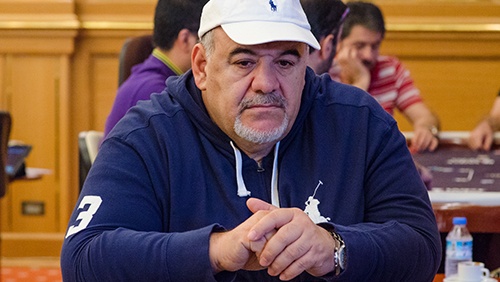 Taking down live poker titles at the age of 64 isn’t easy for most players, but for the Frenchman known as ‘Terminator’, it seems like second nature. Over the course of the weekend, ‘Big Roger’ Hairabedian, previous winner of two World Series of Poker bracelets, took down the 2020 King’s PLO High Roller for €40,401.

King’s Casino’s reopening has attracted many headlines in the poker world, not least because of the casino, which is based on the Czech-German border, initially refused Italian players, then declared itself closed for the foreseeable, only for the casino, which contains the largest cardroom in Europe to re-open quickly once lockdown measures were eased.

Hairabedian, who lives in Marrakech these days, has over $5 million in live tournament earnings, cashing half a dozen times at the live felt in 2020 already. With 60 entries in this King’s event, he enjoyed a dominant day at the felt.

With a prize-pool of €128,250, only the final seven places were paid, and before the money bubble burst, there was plenty of drama, not least in one particular hand. Harry Casagrande – a poker player’s name if ever there was one – eliminated not one, not two but three opponents when he turned a king-high straight to rid Kristijan Maric, Robert Wilke and Andre Ellbracht of any lingering hopes they might have had of winning the tournament. Jan-Peter Jachtmann is considered a PLO specialist, but he left the action in 12th place, flopping top pair but being rivered by Christian Stratmeyer’s two-pair for the German to bust.

Hairabedian is known as being a player who is either all over the table or off it fairly quickly, however, and it was to be his day. By the time he eliminated both Saeed Rehman and Pedjman Hamie, he was the chip leader as the final table formed. Austrian player Jonas Kronwitter flopped a set to send the player known as ‘The Talk’ chatting to friends on the rail and the money bubble was burst, Ossama Khamis benefitting most as he cashed in 7th place for €6,733 when pocket queens couldn’t outrun Roger Hairabedian’s pocket kings.

It would be Kronwitter who would bust next, as Hairabedian continued his run of domination which would eventually see him send five of his six opponents once play reached the money to the rail. Top two pair was good enough for the Frenchman as Kronwitter’s weaker two pair saw him leave the table, and German player Andreas Bremer’s luck ran out when his top two wasn’t good enough, eventual runner-up Stratmeyer having top set.

Hairabedian’s victory gave him another €40,401 to put in the profit column, but more than that, it gave him the first major title to be presented after the COVID-19 pandemic saw players restricted to online poker. For how long live poker is back and how safe it is we don’t yet know, but Hairabedian will enjoy this victory for some time to come after a fantastic final table performance.