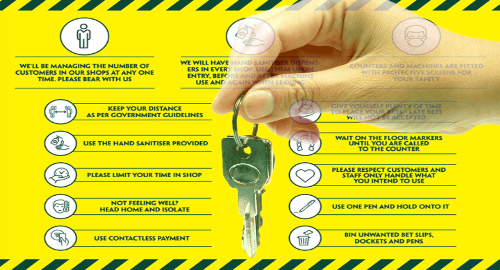 UK betting shops are furiously prepping for their post-pandemic reopening, while Genting Casinos may be permanently closing some of its shuttered UK venues.

On Tuesday, GVC Holdings announced it would reopen all 2,445 Ladbrokes and Coral betting shops in England on Monday, June 15, in accordance with the UK government’s lifting of its mid-March ban on ‘non-essential’ retail operations. GVC’s shops in the rest of the UK will follow suit according to those individual regions’ lockdown guidance.

GVC says the health and safety precautions that punters will encounter upon entering one of its shops “meet or exceed guidelines laid down by the UK government and the World Health Organization.”

For instance, ‘sneeze screens’ will ensure a protective barrier between staff and customers, while the latter who are looking to use a betting station or gaming machine will be supplied with ‘stylus pens’ to avoid physical contact with the machines.

Last week, Betting & Gaming Council CEO Michel Dugher toured a Coral shop and pronounced himself “hugely impressed” with the venue’s new health and safety precautions. GVC CEO Kenny Alexander expressed confidence that the measures were sufficient and he looked forward to “returning to some form of normality.”

Flutter Entertainment’s Paddy Power brand similarly announced Tuesday that all its shops in England and 150 more in the Republic of Ireland will also open on the 15th, while shops in Wales, Scotland and Northern Ireland will remain closed until those jurisdictions approve. (Irish bookies were originally cleared to reopen on June 29 but this timeline was accelerated to June 8 after talks with the government.)

Paddy shops will employ similar protections to ensure the wellbeing of staff and customers, and are asking the latter to ‘Do Your Bit’ by following the “strict measures,” including giving oneself enough time to place your wager as ‘late bets will not be accepted.’

Betfred has stated that it plans to open “a number of branches” on June 15, while William Hill reportedly plans to wait until the second half of the year – so, likely in July – to begin its retail restart.

UK land-based casinos will have to wait until July 4 to reopen their doors, but Genting Casinos, one of the country’s largest operators, has apparently decided against reopening some venues due to the “unprecedented challenges” presented by COVID-19.

On Tuesday, UK media reported that Genting had informed leisure and hospitality workers union GMB that the company was mulling the permanent closure of casinos in Bristol, Torquay and possibly Margate, while redundancies of unknown quantities are expected across all 32 UK properties.

Genting apparently believes business will take a long time to recover to its pre-pandemic levels and the costs of installing social distancing measures will be high. In an email to staff, Genting CEO Paul Willcock claimed that the “significant uncertainty for the foreseeable future” is forcing the company to “contemplate some very difficult options to ensure survival.”